The Manson Family Album was intended to be Marilyn Manson's first studio album and is a precursor to Portrait of an American Family. It is comprised of the original takes and alternate mixes of songs that would later be found on the band's debut and due to the many differences between it and its final form, it can be considered an album unto itself.

Initially, Manson sought out Roli Mosimann to produce the album and with him the band recorded an album's worth of material. At the time, "Snake Eyes and Sissies" was on track to be the band's first single, with a single edit having been made. However the band was simply not satisfied with the output of these recording sessions and shelved the album for a short time.

Within a few months, the band would convince rising star Trent Reznor to produce the album instead. With the help of Reznor and his band, Nine Inch Nails, Marilyn Manson re-recorded and reworked their old material until they were satisfied and released it under the name Portrait of an American Family. "Snake Eyes & Sissies" would never see a single release and in Portrait's credits Mosimann is credited as an engineer with no mention of his production work.

Years later, former guitarist Scott Putesky was asked about these original recordings in an interview and gave the interviewer a tape featuring the unused recordings. The interviewer then released them to the internet where they are now widely available, usually labeled as "Portrait of an American Family Pre-Reznor Mix" or "Portrait of an American Family Demos".

Differences with Portrait of an American Family[edit]

There are many minor and major differences between The Manson Family Album and its successor, Portrait of an American Family:

"Prelude (The Family Trip)": This track is not present on The Manson Family Album and was recorded solely for Portrait of an American Family.

"Snake Eyes & Sissies": This version of the song is 62 seconds longer than the version that was released and featured alternate lyrics. It was also considered as a single and a radio edit was prepared for it that was never released.

"Lunchbox": This version lacks the opening sample of a child saying "Next motherfucker's gonna get my metal" and the opening "bionic guitar" contributed by Trent Reznor, but is otherwise the same.

"Get Your Gunn": This version repeats the chorus and bridge more than the released version and runs 50 seconds longer because of it.

"Citronella": "Citronella" was later renamed to "Dogma" for its official release, though the two versions are close to the same.

"Filth": This track is exclusive to The Manson Family Album and was scrapped when the band changed producer.

"Wrapped in Plastic": This track was not initially planned to be released and was recorded exclusively for Portrait of an American Family.

"Sweet Tooth": This version lacks the 59 seconds of intro noise found on the final mix.

Different Mix: Aside from the major differences listed above, most songs presented on the two albums are essentially the same yet mixed differently. Because of this, different instruments are moved to the front or back of the mix creating a different mood while leaving the composition the same. 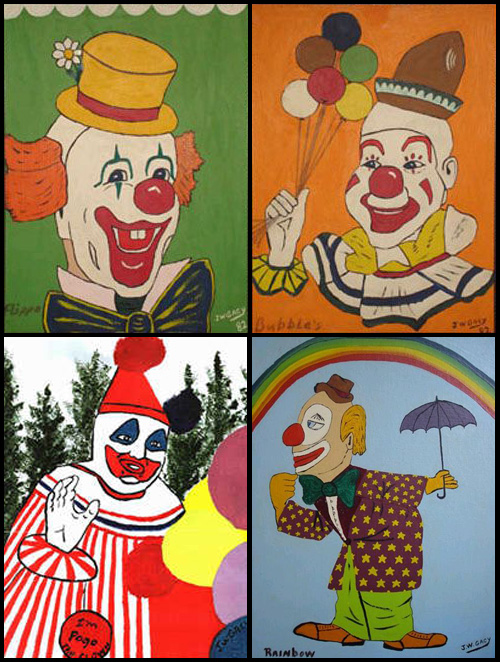 Examples of John Wayne Gacy's clown portraits. Although it is unknown which specific painting Manson wanted for the album's cover, Gacy painted these and many similar clowns in the early 1980s.

The album's original cover art featured no text, simply a painting of a clown by John Wayne Gacy. The interior photography included Polaroid pictures (faked by Manson and friends) apparently of a mutilated female body, and a photo of what Manson described as "one of those dolls from the 60s and you pull a string on the back of it and the eyes get really big and they change colors."

In the early stages of the album's conception, Manson intended to use a picture of himself as a child sitting nude on a couch in the album's interior artwork. Though no genitalia is shown in the picture, and it was taken by his own parents with no vulgar intent, the record label deemed it to be child pornography. 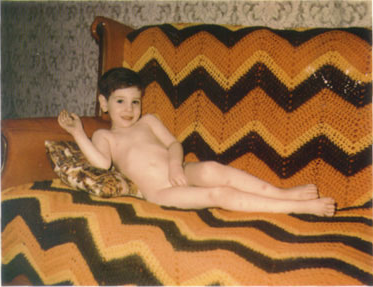 "I wanted to use a photo in [the album]'s booklet of me naked on a couch when I was a kid.

When you hold up something to people, usually what they see in it is what's inside them in the first place. And that's what happened because the lawyers at Interscope said, "First off, that picture's going to be considered child pornography, and not only will no stores carry the album but we're subject to legal retribution from it." They said if a judge were to look at it, the law states that if a photograph of a minor elicits sexual excitement then it's considered child pornography, why am I the guilty person? You're the person who's got a hard-on. Why aren't you punished?" That's still a point I'd like to make. People's morality is so ridiculous: If they get excited by it, then it's wrong."

Marilyn Manson, The Long Hard Road Out of Hell autobiography with Neil Strauss, 1998

By the time the album became Portrait of an American Family, the ideas of using the Gacy artwork and the nude photo was dropped completely.

Note: The above track list is taken from the order the songs appeared on a cassette given to an interviewer by Daisy Berkowitz. It is unclear if this was intended to be the final track order.