For the single see The Fight Song (single)

"The Fight Song" is the second single and the third track of the fourth album Holy Wood (In the Shadow of the Valley of Death). The title is a pun on to sports team anthems known as Fight Songs as the song is partially a post-Columbine statement disparaging mainstream America's own glorification of violence amongst it's youth, while also criticizing the slave mentality of Christianity. "I'm not a slave to a god that doesn't exist" is thought to be inspired from a passage by German philosopher Friedrich Nietzsche which states "the only excuse for God is that he doesn't exist." The music is often compared to Blur's "Song 2". It may also be noted that the line, "the death of one is a tragedy but the death of millions is just a statistic" is a quote from Joseph Stalin and also a quote from Erich Maria Remarque's novel The Black Obelisk. 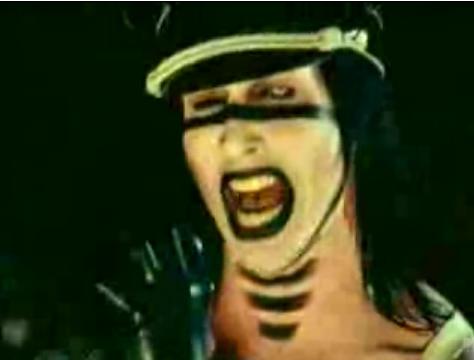 Manson as he appears in the music video

The UK versions of "The Fight Song" included Tarot cards featured in the Holy Wood (In the Shadow of the Valley of Death) booklet. Each card had a description written on its back.

The band performing in front of the billboard in the video

The music video, directed by Wiz, features the band performing on stage at a football game. The teams playing are typical "jocks" facing against "goths", and, according to the scoreboard, are representative of "Holy Wood" and "Death Valley" (a reference to the album featuring the track, Holy Wood (In the Shadow of the Valley of Death). Though it begins as a standard football game, it takes a destructive turn when a player throws a ball at the scoreboard, causing a small explosion, leading to more havoc as a Death Valley player begins cutting down the goal post and setting it ablaze as the music video ends.

As a side note, the billboard behind the band performing reads "We're all HAPPY To live in America", and all the Death Valley players have the numbers "00" on their uniforms (including Manson, having the numbers painted to his back).

The video can be seen as a representation of the concept behind Holy Wood. The two teams of the video (Holy Wood and Death Valley) share the names with the two dueling regions in the world of Holy Wood. Holy Wood is the home of "the beautiful people", who are wealthy and adored, and Death Valley is the host of the lesser, undesirable "Horrible People". In the story, the people of Death Valley revolt against, what they see as a fascist, Holy Wood. The football game is a metaphor for this struggle, and Death Valley's sudden turn to violence acts as the beginning of the revolution. The fact that all Death Valley players have "00" as their uniform number emphasizes their role as "zeroes" or "nobodies". It is assumed that the scene of a football game intertwines with the themes of Holy Wood, as football is simultaneously one of the most violent sports and one of America's greatest obsessions.

The music video generated minor controversy for its violent depiction of a football game between jocks and goths, which some sources have interpreted to be directly "echoing" Columbine.[1][2] Manson, for his part, has vehemently denied this, stating, "I'm trying to show that sports as well as music can be seen as violent, so I chose a traditional black vs white, good vs evil theme for the video."[2] He further dismissed the claims to MTV News at the American Music Awards on January 8, 2001, stating, "People will put into it what they want if it helps them sell newspapers or helps them write a headline. They're gonna want to turn it into something it isn't. Flak is my job."[1]