Splatter Sisters is an upcoming horror film by Adam Bhala Lough. Marilyn Manson and his former fiancée, Evan Rachel Wood are set to star in the film. This film is the first in a planned franchise, and is described by Lough as a sexploitation-serial-killer-slasher-road-movie circa 1989. Manson's involvement with the film was previously alluded to via a MySpace photo in which Manson stated, "after my shoot with Adam Lough (the Carter). Inspirational work for his film, The Splatter Sisters." [1] Manson will be the lead singer of a death metal band in the film, which is set to begin filming this winter. [2] However the production of this film is now in question following the break up of Marilyn Manson and Evan Rachel Wood in August, 2010. 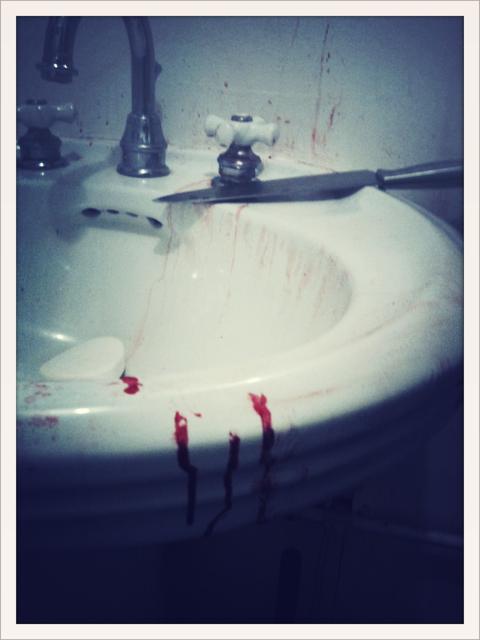 Two sisters (one portrayed by Evan Rachel Wood) living an alienated life at home travel to Hollywood to pursue the frontman of a death metal band (Marilyn Manson).

On February 1st, 2011 Adam Bhala Lough posted a message including the status of Splatter Sisters on his Facebook page:

MansonWiki: You stated in an article with MTV News, that the concept for Splatter Sisters was conceived in 2005 and was heavily influenced by Oliver Stone's Natural Born Killers, as well as Japanese filmmaker Takashi Miike. How will their influence be carried over into Splatter Sisters?

Lough: Style: creative and experimental approach to editing, cinematography, design. Extreme over-the-top gore of Miike. I loved the way Stone switched from B&W to Color in an instant. I love imperfect non-computer-generated gore effects, like when someone gets decapitated and blood starts gushing out but then stops and then starts again. Expect a visual and aural feast for the eyes and ears.

MansonWiki: Both Marilyn Manson & Evan Rachel Wood have confirmed their involvement with the film, Has there been any further developments in regards to casting?

Lough: Ed, Manson, Evan and I have been meeting with actresses and models for the other Sister for over a year. We’re all being really selective. There are so many awesome girls who want to be in this movie it’s difficult. Manson and I email/text photos back and forth almost daily. Casting can be really overwhelming. But I know our girl is out there.

MansonWiki: David Gordon Green of Eastbound & Down and Pineapple Express, is set to produce the film. Manson's affinity for Kenny Powers and his interest for a cameo appearance in Eastbound & Down, is there any possibilty of casting Danny McBride for a role in Splatter Sisters?

Lough: Danny’s down, Manson and I both have hollered at him about it. Last week Danny told me he was from Virginia, grew up about 30 miles from where I grew up it turns out. I bugged out! I have another film for him too, the script is already done, he would play the lead and it would shoot entirely in Virginia.

MansonWiki: At what stage is the film currently in, have you began filming, and when can we expect teasers for the film?

Lough: We’ve not started we gotta cast that other Sister. Manson and I shot a teaser but Ed wanted us to hold off on putting it out until after Cannes but then we sorta forgot about it. It’s pretty cool. I think there's a still photo from it up on the internet somewhere.

MansonWiki: Can you give us any further details on the plot of the film?

Lough: A lot has been said already. What hasn’t been said is that the love story between the two girls is really the foundation for much of the film. The love is very real, electric and we root for them to stay together against all the chaos.

MansonWiki: What caused you to approach Marilyn Manson for the character of Lars?

Lough:I either wanted to cast an actor who could also play music or a musician who could also act. Manson can act, he was amazing in Heart is Deceitful Above All Things. I was blown away by that performance / scene. It has stayed with me for a few years.

MansonWiki: Speaking of which, there has been talks of an actual band being formed and touring to promote the film. How did t his idea come about?

Lough:I think that’s something he came up with organically cause we were talking about who the backing-band for Lars’ band would be and he decided to form a new one both for the film and for fun. Manson told me today ‘the best art/music comes when you’re having fun.’ Recording the music and shooting this film is gonna be a lot of fun. Plus I’m psyched just to give him the opportunity to make some cool new music that’s exclusive to the film!

MansonWiki: Any ideas for band names? Has there been talk of other notable musicians joining the band.

Lough: The band name will be kept a secret until we begin shooting those scenes. Something will very quickly fall in place with a lot of notable musicians. I have no doubt about that. Everyone is excited about this one.

MansonWiki: Are you still planning for a Fall 2011 release?

Lough: That would be really soon. Ideally we’d have a first cut done by the Fall but then they’d need to promote it first.

Thank you for your questions and thanks to all the fans who contact me about Splatter Sisters. Please continue to spread the word and I'll do my best to keep you all informed.