This article is about the EP

Smells Like Children is a remix EP by American rock band Marilyn Manson. It was released on October 24, 1995 in the US through Nothing and Interscope Records. It was produced by the band's frontman and Trent Reznor of Nine Inch Nails. The release represents an era of the band full of drugs, abuse, tours, sound experiments, and is also a reference to the 1968 musical film Chitty Chitty Bang Bang and the book Perfume by Patrick Suskind.

The release was initially proposed to strictly be a remix single for "Dope Hat", but various contributions by engineer and Skinny Puppy producer Dave Ogilvie, Nine Inch Nails live keyboardist Charlie Clouser and new material by the band resulted in an eclectic and unusual combination of material. All the ideas and tracks for this EP were created and composed throughout the touring cycle in support of Portrait of an American Family, and is the first Marilyn Manson work that features longtime member Ginger Fish on drums.

The EP was certified Platinum by the Recording Industry Association of America (RIAA) for shipments of over 1.3 million copies in the United States.[1] Spearheaded by its sole single, a cover of "Sweet Dreams (Are Made of This)", originally written and performed by Eurythmics in 1983, the song became a staple on MTV and helped to establish the band in the mainstream.

After the conclusion of the Portrait of an American Family Tour, the band undertook the opening slot position for Danzig's 4p Tour from March 24, 1995 until May 14, 1995. During their tenure, Danzig/Pantera tour bus driver Tony F. Wiggins befriended Marilyn Manson, bassist Twiggy Ramirez and keyboardist Madonna Wayne Gacy and went on backstage drug binges, perverse acts and other unusual escapades with them.[2]

The most well-known and notorious of Wiggins-related events was a series of backstage makeshift torture, interviews and confessions administered by himself, Manson, Ramirez and Gacy to disturbed, emotionally unstable and otherwise strange individuals who were both strangers and Marilyn Manson fans alike.[3]

After the tour ended, mention of Wiggins or any affiliation of with him was unknown. Manson later described him as "a vacuum cleaner for sin,"[4] and claims him to be indirectly responsible for his own disappearing innocence and human emotions on the road,[5]. The current condition of their relationship is at best, a crucial part of Marilyn Manson history. 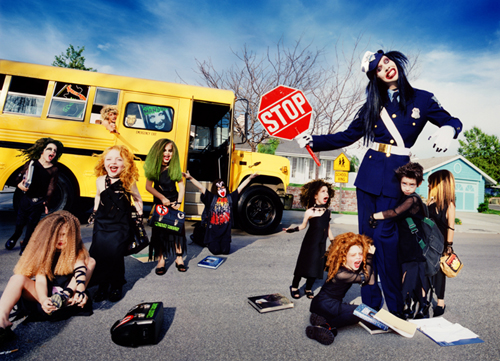 The band's frontman has discussed his thoughts in retrospect on Smells Like Children within his autobiography The Long Hard Road Out of Hell, circa 1998:

Manson has considered the release to be "An album that looks like an album for children that is not for children"; in fact, on the outer rim of the CD label the printed words "Keep this and all drugs away from small children" are visible.

A number of cover songs are included in the track listing, most famous of which is the band's cover of Eurythmics' "Sweet Dreams (Are Made of This)", which helped to skyrocket the band into the mainstream. The other covers on the EP are the Patti Smith song "Rock 'n' Roll Nigger" and Screamin' Jay Hawkins' "I Put a Spell on You", with the latter later featured on the soundtrack for David Lynch's 1997 psychological thriller film Lost Highway. 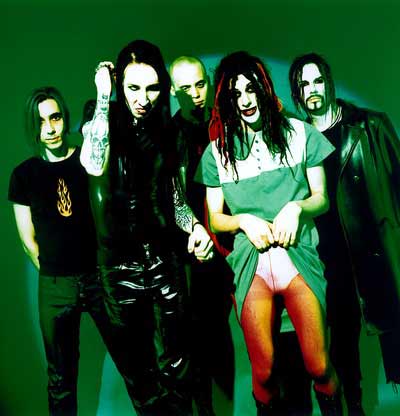 A recorded telephone conversation between Manson's mother and grandmother, titled "May Cause Discoloration of the Urine or Feces", is sometimes included on early bootlegs under the title "Procardia", in a heavily modified version which is actually a fan-made track, and not an actual track from either pressing—this version contains the original track in the left channel, and an extract from Raggedy Ann in the right. The Smells Like Children version was previously featured as part of the sound scape "Revelation #9", released on the single for "Get Your Gunn". Some of these bootlegs may also contain bonus tracks, including a demo for the song "My Monkey" from Portrait of an American Family, and another track called "Choklit Factory" taken from the band's Spooky Kids-era.

The EP alludes to famous occult author Aleister Crowley, particularly in the "Dope Hat" re-recording "Diary of a Dope Fiend" after the Crowley novel Diary of a Drug Fiend. The "Frankie" referred to in "Fuck Frankie" is Frankie Proia, Manson's tour manager at the time who embezzled $20,000 from the band during their tour for their previous release, Portrait of an American Family.[6] Wiggins recorded an acoustic rendition of the song "Cake and Sodomy" under the title "White Trash". Manson stated the irony of having Wiggins "strum and twang a redneck version" of the song was "perfect for its message, since [it] critiques southern Christian white trash".[6]

The "One-Legged..." referred to in "Dancing with the One-Legged..." was "a battered doll of Huggy Bear, the pimp from the 1970s cop thriller television series, Starsky and Hutch, which was missing a leg". Manson explains, "Inside that empty plastic socket was where we hid our drugs throughout the Tony Wiggins tour. Whenever we ingested the contents of that extra orifice, we referred to it in code as 'dancing with the one-legged pimp'".[6] The untitled sixteenth track contains a slower, more ominous remix of "Shitty Chicken Gang Bang" and, approximately 6 minutes in, an unusual audio experiment sometimes referred to as "Poop Games."

Early promotional copies of Smells Like Children featured unauthorized samples from the films Willy Wonka & the Chocolate Factory and Chitty Chitty Bang Bang, as well as other sound bites considered "too extreme", therefore resulting in the tracklisting to be re-edited accordingly for public release, much to Manson's chagrin.[6] Interscope was not interested in buying licenses to use the film samples and demanded written affidavits from the participants in the sound bites, certifying their consent to be recorded.[6] The removed clips were the original opening track, "Abuse, Part 1 (There Is Pain Involved)", featuring Tony Wiggins abusing a masochistic girl,[7] and "Abuse, Part 2 (Confessions)", featuring an interview with a girl who confesses to molesting her 6 or 7 year-old male cousin.[6] These were replaced by "The Hands of Small Children" and "May Cause Discoloration of the Urine or Feces", respectively.

The tracks "Sympathy for the Parents" and "Dancing with the One-Legged..." are distorted sound clips taken from an appearance by Manson, Ramirez and Gacy on The Phil Donahue Show.[8] The episode discussed the dangers of moshing at concerts. The excerpt used in "Sympathy for the Parents" features Ramirez responding to a question about the appearance of the band's members by playing a cassette tape recording of "Scabs, Guns and Peanut Butter," before Manson's answer to the same question. 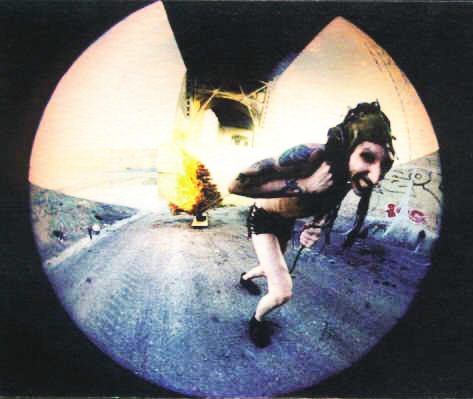 Smells Like Children was anchored by only one single, a cover version of Eurythmics 1983 hit "Sweet Dreams (Are Made of This)".

Manson often drew musical inspiration from his dreams, but the idea to cover this song came from his first experimentation with LSD at a house party, according to his autobiography. He says that he hallucinated a "slower, meaner" version of the dance hit playing, sung in his voice.[9] He also stated that Nothing did not want to release this as a single. They wanted to release their cover of Screamin' Jay Hawkins' "I Put a Spell on You", which, according to Manson, "was far too dark, sprawling and esoteric, even for some of our fans."[6]

The music video for Manson's cover was a gateway to popularity for the band, eventually being nominated at the 1996 MTV Video Music Awards for Best Rock Video, and contains several clips of Manson and band members in what appears to be an old, decrepit asylum whilst wearing a variety of strange costumes. The overall video was shot with unusual filters: this was one of the first videos shot with director Dean Karr's initial vision intact, not based solely on whatever ideas the band had come up with prior. In between these clips are a number of surreal shots of Manson wearing a wedding gown, Manson wandering around an abandoned street in a tutu, birds fluttering around him and leaving dropping on his body, and footage of him riding a pig wearing a cowboy hat whilst covered with mud which Manson rides during the song's climax.

Upon its release, the EP met with mixed reviews from music critics. allmusic gave it a favorable review and said: "Where the full-length debut showed sparks of character and invention beneath industrial metal sludge, Smells Like Children is a smartly crafted horror show, filled with vulgarity, ugliness, goth freaks, and sideshow scares. Manson wisely chose to heighten his cartoonish personality with the EP. Most of the record is devoted to spoken words and samples, all designed to push the outrage buttons of middle America. Musically, it may not amount to much—it's goth-metal-industrial, as good as the "Dope Hat," "Lunchbox," and "Cake and Sodomy" trilogy that distinguished the debut—but as a sonic sculpture, as an objet d'art, it's effective and wickedly fascinating. It's exactly what Brian Warner needed to do to establish Marilyn Manson as America's bogeyman for the late '90s."[10]

Music critic Robert Christgau defined Smells Like Children as an "Unmitigated consumer fraud—a mess of instrumentals, covers, and remixes designed to exploit its well-publicized tour, genderfuck cover art, titillating titles, and parental warning label. The lyrics to "Shitty Chicken Gang Bang" are nonexistent, those to "Everlasting Cocksucker" incomprehensible. Only "Fuck Frankie," a spoken-word number in which a female feigning sexual ecstasy reveals that it isn't "Fool Frankie" or "Fire Frankie" or "Fast Frankie" or for that matter "Fist Frankie," delivers what it promises. It's easily the best thing on the record."[11] Tony Scherman of Entertainment Weekly also gave the release a negative review and called it "an artlessly assembled excuse for an album, these minor-league White Zombie wannabes throw together pointless remixes, irritating skits, and lame covers of songs by Eurythmics, Screamin' Jay Hawkins, and Patti Smith. Co-producer Trent Reznor should hang his head in shame."[12]

The Smells Like Children Tour was the fourth tour Marilyn Manson embarked on. The band was on the tour from June 1, 1995 until February 4, 1996. During these performances, the background scrim was a parody of a ouija board which read "Marilyn Manson" on the center. Another feature to the show was the addition of giant trees on each side of the stage from which hung ventriloquist dummies from the branches. The stage was usually set up to accommodate small audiences, as most of the shows took place in clubs, rather than arenas.

This was the first tour in which Manson began using stilts. The band also began their signature bizarre looks during these concerts as well, by shaving their eyebrows, and donning makeup and sexually suggestive clothes (with Manson wearing jock straps to pulling his pants down and tucking his penis between his legs, and with Ramirez beginning his traditional kinderwhore cross-dressing gimmick).

Once an occasional sight on the band's previous tours, Manson was now regularly seen cutting himself on stage most nights—particularly during performances of "Sweet Dreams (Are Made of This)". He got his main chest scarring from this tour as he got into a heated argument with a crowd member and broke a glass bottle and ran it across his chest.