Frederick Streithorst, Jr. (born in Fort Lauderdale, Florida on June 17, 1970),[1] better known by the pseudonym Sara Lee Lucas, is the original drummer of Marilyn Manson. His alias is derived from the names of American serial killer Henry Lee Lucas and the baked goods company, Sara Lee. He made his debut with Marilyn Manson on July 19, 1991[2]. Since leaving Marilyn Manson in 1995, Lucas has performed in an assortment of industrial bands and is known for his signature tribal style of drumming, the defining sound of early Marilyn Manson material, as well as his involvement with experimental digital percussion. Presently, Lucas is active with his prestigious mastering company, Masterlab.

Streithorst had his friend teach him how to drum at age 11, and went on to perform with local South Florida bands 333 Lunatic Lane, Black Janet, Kinetic Ritual and India Loves You, the latter with future Marilyn Manson bandmate Scott Putesky (Daisy Berkowitz). Streithorst joined Marilyn Manson & the Spooky Kids in 1991, replacing the Yamaha RX-8 drum machine the band had been using for their first year active. He was the only person who auditioned for drummer of the Spooky Kids, and on the basis that they had worked together in India Loves You, Putesky secured Streithorst a position in the band.[3] Traditional during this time was the tendency for the band's members to use aliases combining the names of serial killers with sex symbols, models and the like. Bandmate Gidget Gein coined Streithorst's pseudonym,[4] combining murderer Henry Lee Lucas' name with that of baked goods company Sara Lee, dubbing him Sara Lee Lucas. Lucas appeared on each cassette Marilyn Manson produced between 1991 and 1993, after which Nine Inch Nails' Trent Reznor oversaw production on Marilyn Manson's first full-length record. After releasing Portrait of an American Family in 1994, Lucas accompanied the group on Nine Inch Nails' Self Destruct Tour and their own headlining Portrait of an American Family tour. Before concluding the latter however, Lucas was pressured by his bandmates into leaving the group. He was succeeded by Ginger Fish in February 1995, although his compositions can still be heard on the group's ensuing release, Smells Like Children. 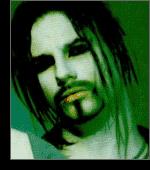 Manson spoke about Lucas' departure in a 1995 interview with Empyrean, remarking how the band planned to evict Lucas in place of Fish.[5] Manson admitted Fish even joined the group on a tour bus one night, with Lucas believing "that he was just a friend of our tour manager."[6] Manson notes several times in his autobiography, The Long Hard Road Out of Hell that Lucas was in fact an enjoyable person,[6] but the band was unhappy with his drumming skills. The band decided to make their performance at a South Carolina gay bar their final foray with Lucas.[5][6] The show involved most band members dressing more bizarre than usual, Manson mutilating himself for the first time, and the band lighting Lucas' bass drum on fire, which set him alight as well.[6] Manson concluded that the band did not fire Lucas, nor did he give his resignation, and that the morning after the performance the drummer simply boarded a flight home.[6]

Lucas had this to say regarding his last performance with the band:

Lucas continued performing using his Marilyn Manson alias even after departing from the group. Partnering with another musician, Trace, in 1996 Lucas formed an industrial electronic project called Electro-Shock Therapy, which remains active in 2010. There have allegedly been over one-thousand Electro-Shock Therapy songs recorded.[7]

Between 2002 and 2003, Lucas was active with three additional projects. First, he embarked on a short headlining tour with Nocturne. The following November, Lucas and Electro-Shock Therapy bandmate Trace were invited to perform with Orlando industrial group Ambionica. Following the New Year, Lucas recorded with Kuzmark. In August 2009, Lucas payed tribute to the late Gidget Gein by performing at Los Angeles' Viper Room, which also saw appearances by Al B. Damned of Gidget Gein and the Dali Gaggers, and Mike Starr of Alice in Chains.

In 1996, around the period when Lucas and Trace formed Electro-Shock Therapy, the pair also founded their own disc manufacturer, Masterlab. The Orlando, Florida facility produces CDs and DVDs, handles graphic design and audio mastering, and has worked for artists including Khia, Mary J. Blige, Mandy Moore, 69 Boyz and Robert Palmer. In November 2009, Lucas and Trace began production on a PBS television series called SoundScapes.[8]

Shortly after Lucas' departure from Marilyn Manson, former bandmate Scott Putesky was also released from the band. Both Lucas and Putesky joined each other in a lawsuit against Marilyn Manson, seeking unpaid royalties for the band's early discography, settling their case in 1998. The settlement of their case has never been disclosed. In January 2009, it was reported that Manson wanted to contact Lucas in regards to the former's lawsuit involving Stephen Bier (Madonna Wayne Gacy).[9]