Marilyn Manson's artworks span roughly 28 years, from 1995 to today. Initially Manson painted as a form of recreation, but in more recent years his paintings have appeared for sale in dedicated exhibits.

On October 20th, 2010, Marilyn Manson.com was updated with the following high resolution images.

From the beginning Manson has been a recreational painter, the oldest of his surviving pieces dating back to 1995, which he typically painted in order to trade the finished works for drugs with drug dealers. It wasn't until after his 1998 Grey period that Manson began his career as a watercolor painter. In 1999 he made five-minute concept pieces and traded them for drugs, with the knowledge that they may accumulate in value over time. Gradually Manson became more drawn to watercolors as an art form in itself, and instead of trading them, kept them and continued to paint at a proficient rate.

This manic creativity resulted in an exhibit for his art, The Golden Age of Grotesque, held at the Los Angeles Contemporary Exhibitions Centre between September 13 and 14 of 2002. The reaction to his paintings was largely positive with one critic comparing them to Egon Schiele's pieces and describing them as heartfelt and sincerely painted, and Art in America went as far as to liken them to the works of a 'psychiatric patient given materials to use as therapy'. Others however saw less merit in the works stating that the value was in the celebrity.

Two years later almost to the day, during September 14 and 15 of 2004, Manson held his second exhibit, Trismegistus, on the first night in Paris and the second in Berlin. Again the reception to the works could be described as mixed but was largely in favour of the artist.

Manson opened his own art gallery, The Celebritarian Corporation Gallery of Fine Art, on October 31, 2006 in Los Angeles for which his third exhibition (by invitation or appointment only, after the opening night) was the inaugural show. From April 2 until April 17, 2007 Manson's recent works were put on display at the Space 39 Modern & Contemporary Gallery Exhibition in Florida. 40 pieces from this show were ported to the Gallery Schenk in Cologne, Germany to be publicly exhibited from June 28 until July 28, 2007, after which they were returned to the Space 39 Modern & Contemporary Gallery.

Manson's next retrospective was on display at 101/exhibit in Miami's Design District thru Feb 20th 2009.

In 2010 Manson's an exhibition billed as "Hell, Etc.", was held in Athens, Greece at the Athenian Culture Centre throughout April 2010. In 2011 an exhibition for Manson's work was held at the Vienna Kunsthalle, "Genealogies of Pain". At the end of 2011, from November through to February 5 2012, 212 Productions staged an exhibition of Manson's paintings under the title of The Path of Misery. Manson explained at the event's launch that he had chosen paintings which he felt represented milestones on his path out of misery, something he also chronicles on eighth album Born Villain.

Price ranges of the artworks[edit]

The price of Manson's works has been a somewhat controversial point for fans and critics alike, with most fans realistically unable to afford the paintings save for fine art editions and lithographs. Manson's prices however are realistic and reasonable considering the long-term value at a time when prices for contemporary art have never been higher.

When new paintings were added to the website for sale in late 2003, their prices somewhat reflected Manson's success and his growing skill. Hitler Takes a Nap was priced at $10,000 and Vampyr was priced at $30,000 (though they were of identical dimensions), two Jon Benet portraits were priced at $30,000 each, and Experience Is the Mistress of Fools was sold for $35,000, and was used as the cover for Marilyn Manson's 2004 album Lest We Forget – The Best Of. Manson's biggest sale to date was in 2007 when a American collector purchased Die Deutsche Kampferin for $105,000. 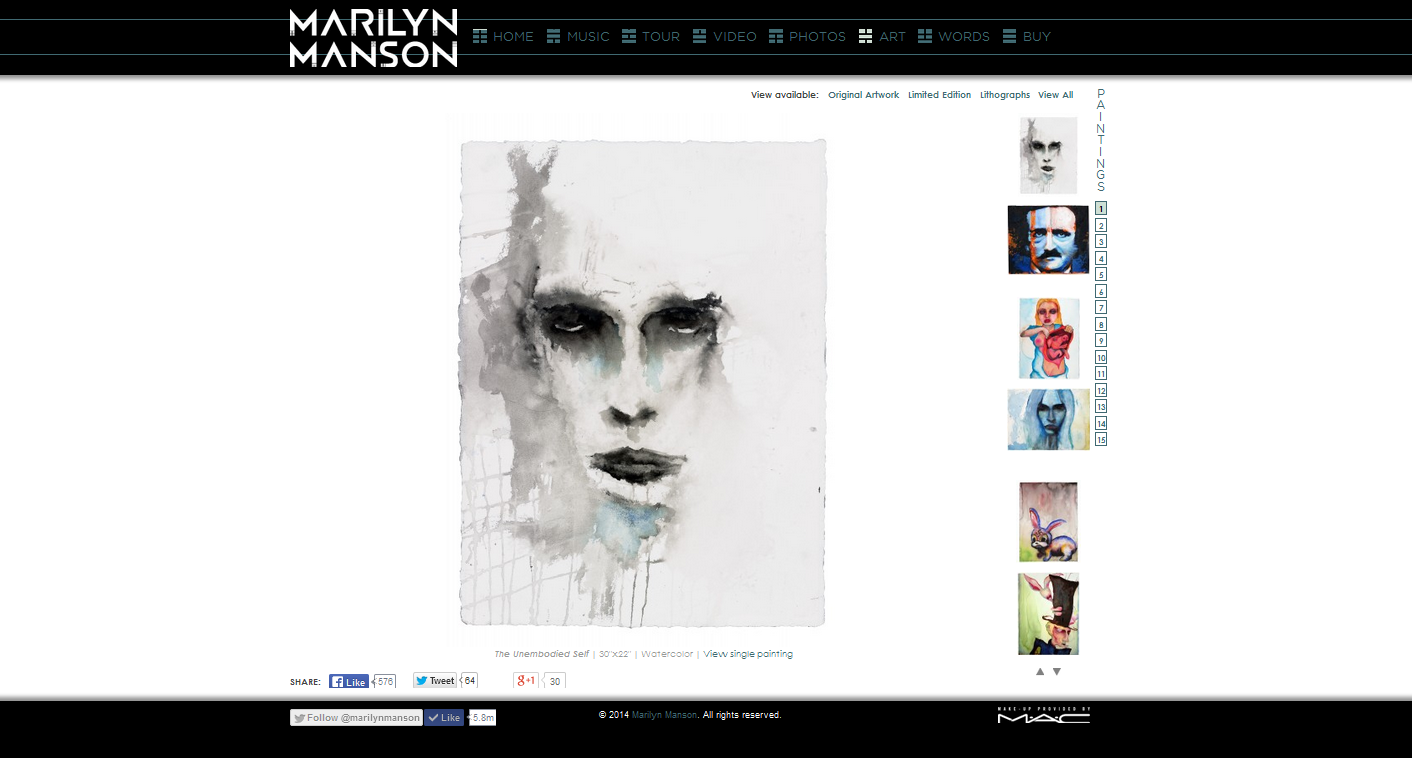 In 2011 there was a major update of the MarilynManson.com website. The new Paintings page featured a white background with CMY (cyan, magenta & yellow) lines and the MM swastika logo in the top left corner. You can scroll through fifteen pages of artwork to the right. Sometime in 2013 the logo and color lines were removed. The painting "The Unembodied Self", which was printed on T-Shirts and part of the VIP meet and greet tour package was added.

The new updates include originals, limited editions and lithographs. Purchases and price inquiries can be completed directly on the site.

A sampling of available work:

In 2006, following the untimely death of legend Dimebag Darrell Abbott, curator Curse Mackey commissioned Marilyn Manson as well as over 50 other musicians to contribute custom hand-painted Dean ML guitars to create a touring art exhibition tentatively titled, Six-String Masterpieces which toured alongside American music festivals Ozzfest and Family Values. Manson's contribution was a watercolor-esque stained Dean ML that paid homage to Manson's painting Grey Daisy painted in acrylics. This piece was appraised at somewhere between $2,000- $7,500 and came fully equipped with all electronics and pickups.

Controversy has always followed anything Manson has laid his hands on and his paintings have proved to be no exception. In 2005, his Elizabeth Short as Snow White series was linked in the UK with the stabbing death of 14-year old schoolgirl Jodi Jones in 2003 at the hands of boyfriend Luke Mitchell. According to presiding Judge Lord Nimmo Smith, Mitchell's fascination with the rocker may have been a factor and that the similarities sustained by the victim, who was stripped, tied up and stabbed to death, with those of Manson's paintings of Elizabeth Short "could not be ignored". The Judge further told Mitchell, "I think that you carried an image of the paintings in your memory when you killed Jodi". Manson, for his part, replied on the Sunday Mail, "What I do know is that it is all about the education that parents give their children and the influences they receive, not putting the blame elsewhere".[1]