The Marilyn Manson discography spans roughly 34 years, from 1989 to today. This list includes the band's efforts prior to signing with Interscope Records, during the time they performed as Marilyn Manson & the Spooky Kids. Worldwide Marilyn Manson has sold over 50 million records worldwide.[1] Three of these records have been awarded platinum certification by the RIAA and three more have been awarded gold, while the band has seen nine of its releases premier in the Top 10, two being number-one debuts. 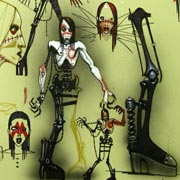