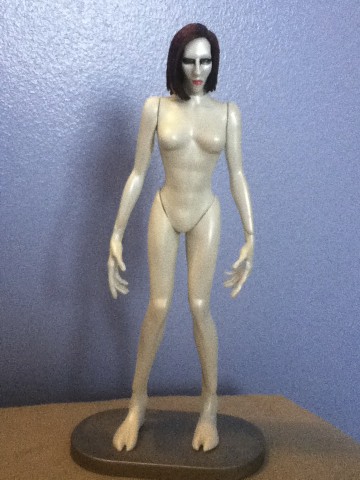 The Marilyn Manson Action Figure Series spans three years, from 2001 to 2003. They were designed by Yasushi Nirasawa and sculpted by Yoshihiro Saito, in cooperation with Manson himself, and were released by Japanese toy manufacturer Fewture. Initially the figures were only sold in Japan but were later released worldwide in January 2002. The series was also accompanied by a website, MansonToy.com, which disappeared by late 2003. The design for each figure is very intricate; each is very well detailed and is a realistic representation of the original sources. Manson stated that he chose Japanese manufacturers because they are "more daring" than toy companies in the US. 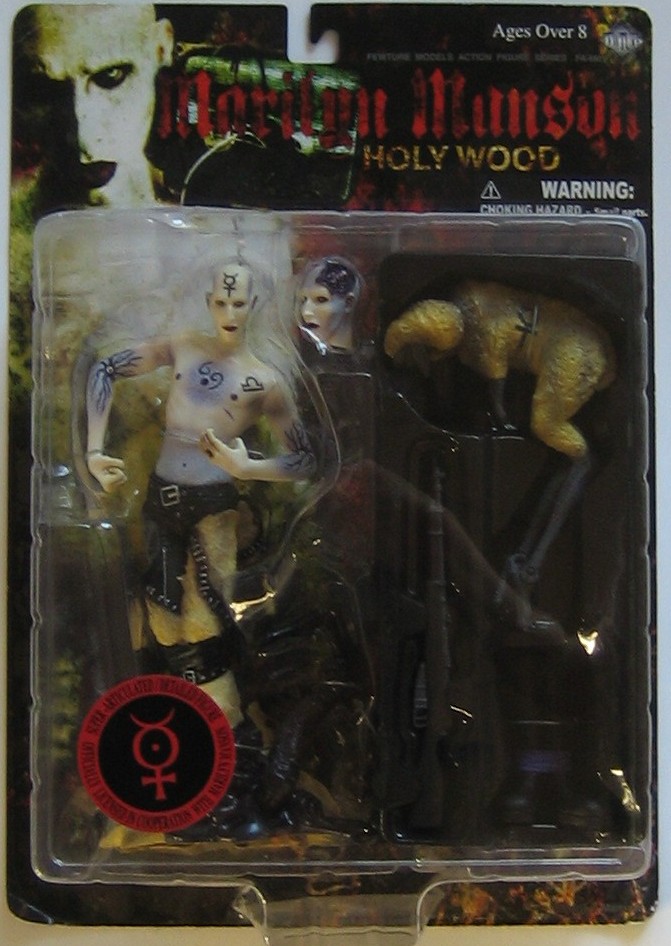 The Holy Wood figure was the first of the series; it was released worldwide on January 10, 2002. It is perhaps the most intricate and interactive in the series, after the Mechanical Animals figure. The figure portrays Manson as he appeared in a promotional photo by Perou for Holy Wood (In the Shadow of the Valley of Death). Both arms include only Manson's cyaegha tattoos, despite the fact that Manson had nine tattoos at the time of this portrayal. Parts of the torso and head seem to be comprised of scales instead of skin. The center of the chest presents a gunshot wound through the heart, which if seen from a certain angle, is totally empty, as the wound covers from chest to backside; on the backside the surroundings of the gunshot wound look infected. Since the original picture the Holy Wood figure was based on only covered head to torso, the lower part of the body was presented as the tree-like skirt worn in "The Nobodies" music video. The legs are covered with a yellowish fur, with straps all over it. Underneath mechanical claws and tentacles emerge, in a style that is reminiscent of H.R. Giger's artwork. The tentacles too are intricately detailed.

The figure also includes a rifle, a sheep with two heads and ostrich-like legs, as well as the Mercury symbol on its body, a pair of regular leather pants and boots, which can be used instead of the fur and tentacles that initially cover Manson's legs, and an additional head, similar to the regular one, but with a massive head wound through which Manson's brain can be seen. When analyzed closely, even a fetus is included inside the wound. This head is an allusion to the one of the back cover of vinyl Holy Wood (In the Shadow of the Valley of Death) release, and also the "Autopsy" video.

The Holy Wood figure comes in a dark packaging with the red Marilyn Manson logo that was used during the Holy Wood (In the Shadow of the Valley of Death) era. The picture used on the box is of the Death tarot card used in its respective album's booklet. A kabahlistic symbol can be seen in the inlay, along with a red shiny sticker of the Mercury symbol. The back of the packaging features an image of the Hanged Man tarot, all in dark tones of red and green. 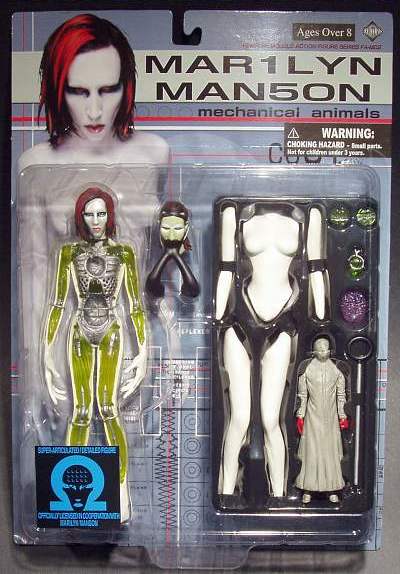 This is perhaps the most popular of the four figures. The figure portrays Manson as Omēga, the androgynous extraterrestrial shown on the Mechanical Animals album cover, and the music video for "The Dope Show". This is a stand-out figure as its body from neck to toe can be completely disassembled; the inside is translucent-green with a robot-like design. Two holes are made so the owner can introduce the translucent-purple brain located in the stomach, and the translucent-green heart.

The figure also includes two pills, green and translucent, which read Coma (reminiscent of the image on Mechanical Animals's disc). As do all four figures, it contains a removable head; the original head is of the red-haired Omēga, and the second head is of Omēga with two black tubes emerging from its mouth (as seen in the limousine where he is carried away to stardom in the music video for "The Dope Show"). One of the masked men who captured Omēga in the music video is included in the package, along with an immobilizing rod the men used in the video. The figure is considerably smaller than the other figures. The arms, legs and body, including Omēga's infamous breasts are separated so they can be removed; the legs and arms are each divided in two parts. 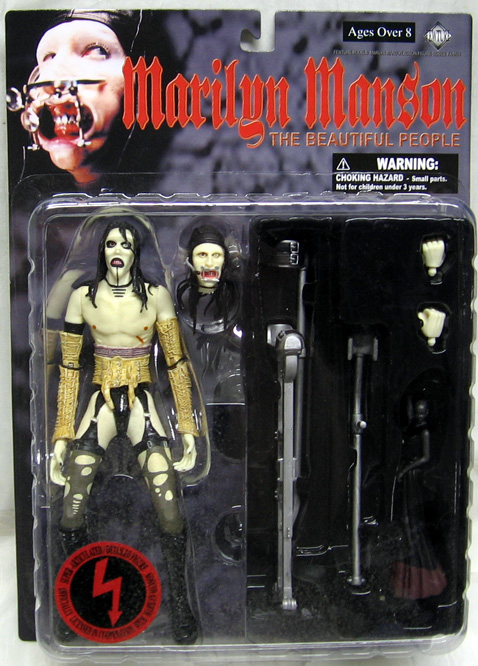 This figure portrays Manson with his Beautiful people and Antichrist Superstar tour outfit, a corset and gloves with straps, in a mummy like fashion. the legs have ripped stockings and boots, while the hands have the nails meticulously painted black. the head has long black hair, an angry expression, lenses correctly detailed and a black stripe descending from the mouth, muscles from the back are very detailed, the chest even has Manson's brand like scar, colored in an orange tone. Items are a pair of stilts, with arm support, both include straps so they can secure the figure, when placed, they make the figure significantly taller, and it looks just like Manson did when he performed "Kinderfeld" in the Dead to the World tour. Both hands are removable, the second pair are closed fists, which must be used with the stilts, to grab them. the second head is the most well known Floria Sigismondi collaboration with Manson picture, and one of Manson's most shocking images to date, as can be seen in The Beautiful People video, Manson wearing a strange black leather cap, a bizarre mouth instrument which opens his mouth painfully, revealing silver teeth. this is the head that must be placed with the stilts. Companion features one of the bald faceless dancers seen in the video, with black like skin and long skirt, the figure comes with a holding base, as the main figure does too.

This figure's packaging uses a picture of Manson with his mouth open by an antique dental instrument, as seen in The Beautiful People video. the sticker is a red shiny shock logo. in the back, there's a picture of Manson on stilts, probably performing "The Nobodies" In the 2001 "Guns, God and Government" Tour. 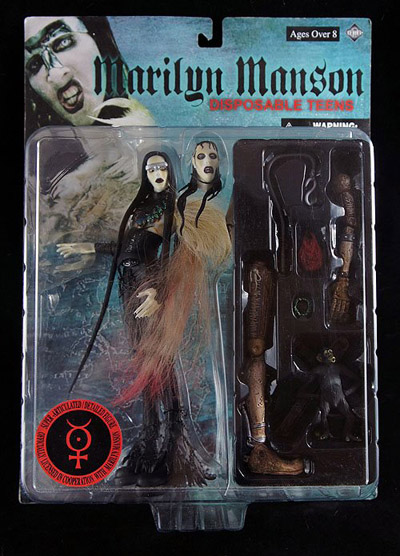 The Disposable Teens Figure is designed closely after Manson's appearance in the video of the same name. The face has the Tau cross, silver colored covering the forehead and nose. lips are open partially revealing teeth and long black hair. The head is attached to a peacock feather with a soft veil. when removed, chest is revealed, with the scar in it's place. Both hands are semi flexed, the torso has a black corset on, black leather pants with high heel boots are on, with a bizarre detail on the crotch, a sea like animal or decoration. Second head features the one seen at the beginning of the Disposable Teens Video, Manson with long black hair and sharp silver teeth. The hair was put on the back in a manner to indicate wetness, and the forehead was added thin black lines similar to the ones Manson wore in the Smells Like Children Era. Items include replacement arm and leg, both prosthetical like, wooden and spiked. the consistence of the prosthetic replacements is very different to the one of the rest of the figure. A hook with a clinging Heart is included, as seen on the video. the Heart is well detailed, including veins. Companion is the monkey seen on the video next to the Bishop Manson, the small figure includes a cross on it's back and a removable leaves crown.

The figure is packed in a green tone similar to the Disposable Teens single. the Manson picture chosen for the front is the one seen inside of the Holy Wood album booklet, Manson with the Tau cross on his forehead. Sticker is a red shiny Mercury symbol. on the back, the Disposable Teens Cruci-fied baby is shown, as seen in the Single cover too. when the figure is removed, the inlay reveals a design yet to be analyzed, a map of sorts.

All of the figures were released in limited edition stone color. The exception was the Mechanical Animals figure which, in tune with the album's glam rock theme, was also released in a deep pink. There were only six hundred and sixty six (666) of the Mechanical Animals pink limited edition figures made. The RRP for all eight figures was $16.95 in the US and £14.99 in the UK.