Before embarking on tours under the wing of a major label, Marilyn Manson spent several years performing independently in various Florida locations including Fort Lauderdale, Boca Raton, Miami Beach, Hallandale and Davie; only three shows are known to have been played outside Florida between April 28, 1990 and April 23, 1994. The band was allegedly payed over $300 more than the normal rate for their first gig at the Reunion Room.[1] This was due to Manson's "lesson number one in music-industry manipulation: If you act like a rock star, you will be treated like one."[1] The group billed themselves until August 1992 as Marilyn Manson & the Spooky Kids, after which the "Spooky Kids" moniker was dropped.

After the band's fourth show,[2] which Manson has described as the band's "first real performance," keyboardist Perry Pandrea (Speck) and bassist Brian Tutunick (Bundy) were fired from Marilyn Manson & the Spooky Kids. For the next performance they were replaced by Stephen Bier (Gacy), who hadn't yet attained a keyboard so instead played with toy soldiers on stage,[3] and Gein. Interpol's Sam Fogarino was once offered a position in the band, however he declined, much to his father's disappointment.[4] Fogarino later arranged a remix of "If I Was Your Vampire" in 2007. 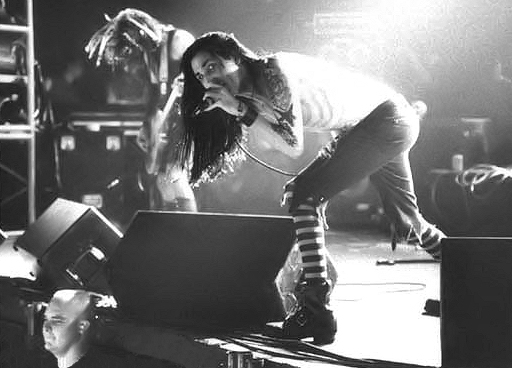 During the first two years of activity, Marilyn Manson primarily recorded the songs they were known to perform at Florida venues, some which would never be performed live again once the band found mainstream success.

During the Spooky Kids era, girls covered in fake blood and animal masks were known to share stages with the band. Manson describes in The Long Hard Road Out of Hell a night where one woman ironed a Nazi flag onstage.[5] Cages and heads of dolls were also strewn across stages. At the band's July 11, 1990 performance, the first 10 people who attended the show with an X across their forehead received a limited Marilyn Manson milk chocolate bar.

Gidget Gein explains in the unauthorized documentary Demystifying the Devil that when he joined the band, he was with them for a few weeks before their performance on July 4, 1990.[7]

Others state Marilyn Manson & the Spooky Kids' first live performance was an unlisted date in 1989, and that their second show took place in November of the same year. These sources also include nine dates between their purported second show in 1989 and the July 4, 1990 show which Gein claimed to be one of his first live shows with the band. As the band did not perform without a bassist, these mysterious nine dates following bassist Tutunick's termination and the live induction of Gein cannot exist. Other sources state that Marilyn Manson & the Spooky Kids' first live performance was on April 28, 1990, which supports Gein's account, because the second show and last with Pandrea (Zsa Zsa Speck) and Tutunick took place only weeks before the show on July 4, 1990.

The exact location of the band's July 4, 1990 performance has been questioned. Former guitarist Scott Putesky (Berkowitz) claimed the performance took place at Club Nu in Miami Beach, Florida, and was the first for both Gein and Bier,[8] though alternatively, Gein mentioned that it took place at the back of a trailer in a local trailer park.[7]