Jessicka Addams (born Jessica Fodera October 23), better known by her stage name Jessicka, is a professional American musician and artist. She was the first to use this alternate spelling of her given name Jessica. She added the "K" to the original spelling of her first name and dropped her surname, paying homage to Magick (Book 4), by Aleister Crowley. She was the lead singer of the alternative rock band Jack Off Jill until its separation in 2000, and is now the lead singer of another alternative rock band, Scarling.. She is a friend of Marilyn Manson, and performed with him, among others, in the short-lived Mrs. Scabtree project. She dated Jeordie White from 1992 until 1997.

Jessicka was born in Miami, but was raised in Sunrise, Florida. In 1991, she met Marilyn Manson at a local bar called the Squeeze; the two quickly became friends. He encouraged her to start a band, which would later be called Jack Off Jill. Over the next 15 years Fodera would be involved in such bands as Jack Off Jill, Mrs. Scabtree, Honey to Ash, Messy, and more currently, Scarling.

After a few failed attempts at starting a band, Jessicka met Tenni Arslynian while attending Piper High School. They had begun writing songs, but had not yet formed a complete band when Robin Moulder and Michelle Oliver joined them to create the band Jack In Jill. In 1992, Jack In Jill got their start when they were asked to open for fellow Floridian and long time friend Marilyn Manson and his band, Marilyn Manson & the Spooky Kids at a Davie, Florida nightclub called the Plus 5 Lounge. Before advertisements for the show were printed, Manson suggested a name change to Jack Off Jill, which the foursome accepted. 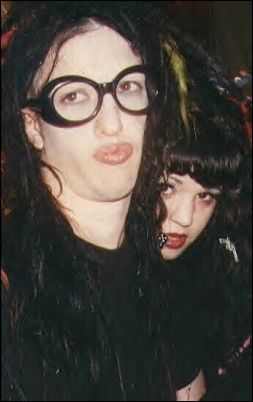 Jessicka and Twiggy Ramirez.
Dreadlock-clad Jessicka was the center of all the hype and attention that Jack Off Jill received. She delivered her vocals in an angelic to banshee-like voice and performed on-stage antics dressed in Goth or kinderwhore attire, that included stripping young men on stage while the band and crowd taunted the exposed fans, as well as writing the word cunt on her body, slicing her arms on-stage with a razor and covering the audience with multi colored spit, candy, and her own blood. In early 1993, Jessicka and Manson formed Mrs. Scabtree. Mrs. Scabtree was a side project where Manson played drums, while Jessicka shared vocal duties with then boyfriend, Jeordie White, known later as Twiggy Ramirez.

In late December 1994, Jessicka spent a night in jail when she and Manson were arrested after a concert in Jacksonville, Florida after being accused by the town's Christian Coalition for breaking the town's adult entertainment codes. Both singers were charged with misdemeanors. Though Jessicka's onstage behavior was often labeled as shocking, she's never claimed to be a shock rocker. It did not help that after a four year relationship, then boyfriend Jeordie White, began to mimic Jessicka's dress and appearance, making critics' comparisons draw even closer. At this time Jessicka increasingly cut herself on and off stage, which earned her the title of Patron Saint of Self Injury, a line that would later resurface in the lyrics to Jack Off Jill's song, "When I Am Queen". The band released their first full-length Sexless Demons and Scars, on September 9, 1997, then hit the road on several national tours throughout the United States and Canada. 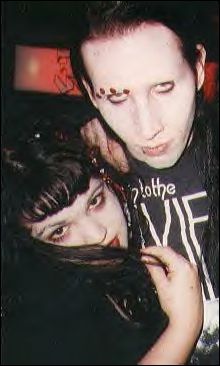 Once back in Los Angeles, Jessicka began to question her commitment to Jack Off Jill. At this time not only were she and band mate Robin Moulder not agreeing on the band's direction but she and mentor Manson were no longer on speaking terms. The initial strain in their relationship was due to the involvement of Manson's ex-guitarist Scott Mitchell Putesky in Jack Off Jill, and Jessicka's ongoing feud with ex-boyfriend, Twiggy Ramirez. In early 1998 after reading Manson's autobiography The Long Hard Road Out of Hell, and finding her role in the story had been reduced to a mere mention as a groupie, she decided to contact Manson. She found out that Manson believed that she had employed Putesky in retaliation to how she was negatively depicted in the book. Their renewed friendship is speculated to be the reason why by early 1999, Putesky was no longer a member of Jack Off Jill and the band were asked to take the opening slot on Marilyn Manson's Rock Is Dead tour, after Hole departed. By most accounts, the split was amicable.

On July 17, 2000, Jack Off Jill released their second full-length album, Clear Hearts Grey Flowers, just as their label was preparing to close its doors. Producer Chris Vrenna played drums for the band's last show at The Troubadour in Los Angeles in April of 2000. Jack Off Jill officially separated in late 2000.

On April 7th, 2015 Bust.com announced a Jack Off Jill reunion show at The Orange Peel in Asheville, NC on July 18th as well as a Pledgemusic campaign offering "Golden Tickets" and other Jack Off Jill rarities related to the show. The 2015 lineup consists of Jessicka, Tenni Ah-Cha-Cha, Michelle Inhell & Helen Storer. Daisy Berkowitz joined the band on stage for their encore, "Cinnamon Spider", "Strawberry Gashes", & a cover of the Cure's "Love Song" 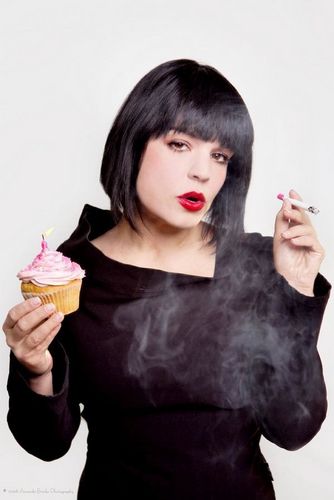 After making Los Angeles her permanent residence, Jessicka was invited in 2001 by guitarist Christian Hejnal to perform guest vocals on his solo album. They began recording and rehearsing together and eventually recruited the musicians who would form the first and very short-lived lineup of Scarling. in 2002. In early 2002 Jessicka was introduced to Long Gone John, owner of Sympathy for the Record Industry, by mutual friend Mark Ryden. On March 19, 2003 Scarling.'s debut single, "Band Aid Covers the Bullet Hole", was released on John's record label. Its cover featured an illustration entitled Wound 39 by artist Mark Ryden. In April 2004, Scarling. released their first album, the seven-song, thirty-three-minute Sweet Heart Dealer, which again utilized the team of Ryden and Vrenna.

In the autumn of 2004, Scarling. was invited to join the lineup of the Robert Smith curated Curiosa Festival, performing on select West Coast dates alongside Jessicka's long-time favorite, The Cure. Smith described the band's music as "dark, desperate, chaotic, gorgeous pop music, the sound of the end of the world" and nominated Sweet Heart Dealer for the 2004 Shortlist Music Prize.

In December 2005, after releasing their second full length album So Long, Scarecrow, Scarling. embarked on its first UK tour, creating a buzz for themselves and selling out most venues. While in Europe, Jessicka attended long-time friend Marilyn Manson's wedding to burlesque performer Dita Von Teese on December 3, 2005, in a secular ceremony in County Tipperary, Ireland. In 2006 Jessicka continued to tour in the United States and Europe with Scarling., touring with such bands as The Wedding Present and Depeche Mode.

Scarling. began working on their third full length album in 2013 and is due to drop in 2016.

Jessicka is bisexual and has been open about her sexual experiences with both men and women. She has been romantically linked to musicians such as Twiggy Ramirez, guitarist Clint Walsh of Tweaker, Carlos Dengler from Interpol, and Scarling. guitarist Christian Hejnal. On February 14, 2006, (Valentine's Day) while on a break from touring, she and guitarist Christian Hejnal were engaged. Their wedding took place on October 13, 2007 at the Oviatt Penthouse in Los Angeles. Keanu Reeves, Jeff Buhler, Roman Dirge, Kevin Haskins, Dita Von Teese, Mark Ryden, Jared Gold, Elizabeth McGrath, Tim Biskup, Lisa Leveridge, and Samantha Maloney were amongst the guests that attended. The couple changed their surname to Addams. Ryden's wedding gift was a miniature portrait of the couple, a faithful adaptation of Jan Van Eyck's "Arnolfini Portrait," that was reproduced on the invitations. Jessicka was friends with Jennifer Syme famous for being the girlfriend of Canadian film actor Keanu Reeves, whom she dated from 1999 until 2000. She died at the age of 28 in a car accident, allegedly caused by the consumption of alcohol and drugs which she had taken at a party at Marilyn Manson's residence the night before. 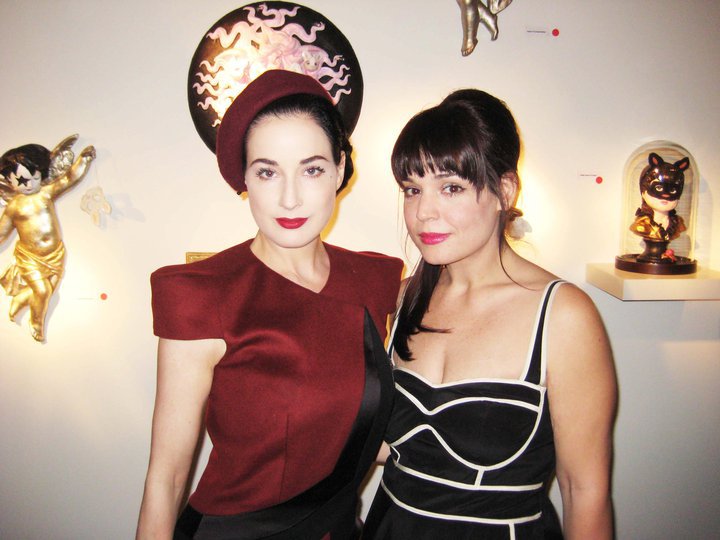 On April 25, 2008 Jessicka unveiled her artwork to the public at the World of Wonder Storefront Gallery in Los Angeles, California. The multi-artist show called "depARTed" was curated by actor Daniel Franzese and featured art inspired by stars that died before their time. All art submitted was inspired by famous personalities like Marilyn Monroe, James Dean and Anna Nicole Smith, to notable figures like Abraham Lincoln and Martin Luther King Jr., to artists like Keith Haring and Isabella Blow.

Jessicka also took part in Daniel's next show Crusaders and Haters at Royal/T gallery that showcased an assortment of work from artists from all over the world, depicting superheroes and villains in pop culture. The show opened July 17, 2009.

On February 7, 2009 Jessicka attended artist Mark Ryden's exhibition "The Snow Yak Show" at the Tomio Koyama Gallery in Tokyo along with well known American artists Tim Biskup, Junko Mizuno, and Marion Peck. This show marked a bit of a departure for the artist, whose previously brightly colored palette and rich back rounds were replaced by a more austere, minimal look and staying to a serene palette of white and grey tones. Jessicka was listed as one of Ryden's muses for the show.

Jessicka has curated two different art shows under the name Dark Dark Science. The first was on November 13, 2010, the show was collectively entitled 'Smile Even if it Hurts', a joint exhibit with friend and fellow artist Lindsey Way. The second show was on August 4, 2012 and ran until August 28, 012. The show was called 'MiXTAPE'. Artists were asked to pick a song and create art inspired by that song. 24 artists participated in the show including Mark Ryden, Frances Bean Cobain, Camille Rose Garcia, Fairuza Balk, Aaron Smith, and Tara McPherson. The eclectic mix of songs chosen were featured for digital download on iTunes.