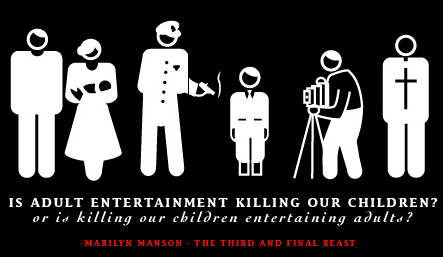 The title of our forthcoming album is "In the Shadow of the Valley of Death". We have written over 100 songs that tell the story that will be presented in my upcoming film HOLY WOOD. We are recording in parts of Death Valley as well as other undisclosed residences. The band is working with seminal electronic mastermind Bon Harris (Nitzer Ebb) and Dave Sardy (Bark Market, Slayer). I am producing the album and am being assisted by these other two gentlemen.

This record finishes what ACSS began and its sound is unlike any of our other albums. I can say, however, it is the most violent, yet beautiful creation we have accomplished. My inspirations are being drawn from alchemy, my association with the O.T.O., JFK and our very own Holy Bible. This is a soundtrack for a world that is being sold to kids and then being destroyed by them. But maybe that's exactly what it deserves.

I have a hope for a new, stronger humanity. An age of enlightenment, an Age of Horus. The "great" are only "great" because we are on our knees. It is time to rise and time to create.

We are now the people our parents warned us about. And we should be, because they were naive.

We truly sit in the shadow of death, or rather the billboard that advertises it. We're all going to die! and if enough people are taking photos, we will all be stars.

But it's all really a popularity contest now.
How you die.
How many people you take with you.
What your cause was.
How good is your sound byte.
We even make martyrs where others, equally and brutally murdered fall as just statistics.

Murder sells, grief sells but boy does Jesus Christ sell. "Well, she died for God. Because if she had denied her faith she would have lived!"
SURE.
So if this school-shooting victim had said, "No spare me, I hate God", the deranged killer would have followed his own "Christian values" and turned the other pimply cheek. Right, maybe on the WB NETWORK made-for-TV version we can expect any day now. Sadly and simply that poor girl and her classmates didn't die for Christ or anyone else. She died because her head was where Dylan Klebold had his rifle aimed. We can all agree these deaths were unnecessary. So was my grandfather's and your brother or dad or JFK or Christ himself. But let's not make martyrdom a popularity contest based on cash, guilt and fear. I'm sure if they could bottle every tear we've shed in these events, they'd sell it back to us as bottled water. The crucifix is already the highest grossing mass-market piece of merchandise sold worldwide in the history of mankind. So where does that leave us? I say our art. That is all that makes us worth being alive. It's surely not what drives us to death. Each artist is a duality. On one hand he has human feelings and on the other he is an impersonal machine or process. But you cannot understand his psyche; you can only understand his creative achievements. I am a vehicle. An artist cannot be expected to interpret what he does for us. It must change us and in the change, we become the interpretation. The answer.

There is a thin line between psychosis and creation. Who's to say madness isn't pure enlightenment?

YOU CAN ONLY DO!

Everything you do is part of a plane plummeting towards our pitiful, dying earth. But your art, what you create is stepping onto the burning wing and forgetting silly things like life and death for a moment. Just to enjoy for one second a glimpse of beauty before you are reduced to ashes.