This article is about Marilyn Manson's art movement 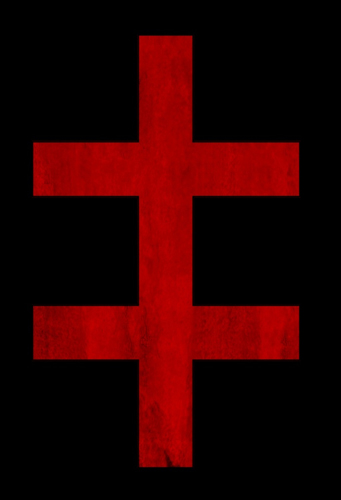 The double cross on the front of a t-shirt.

The Celebritarian Corporation is the name that Marilyn Manson has given to his self proclaimed art movement. Manson has coined a slogan for the movement: "We will sell our shadow to those who stand within it."

It is also the namesake of an art gallery owned by Marilyn Manson, called The Celebritarian Corporation Gallery of Fine Art. The gallery, located at 667 Melrose Avenue in Los Angeles, is home to a collection of watercolor paintings by Marilyn Manson.

Celebritarian first arose as a secret website, Celebritarian.com, which although it was first discovered during the Holy Wood (In the Shadow of the Valley of Death) era, in 2000, its web counter dates back to 1996, the year Antichrist Superstar was released.

The website was hinted at in the lyrics of "The Fall of Adam" from Holy Wood:

And in the liner notes to Holy Wood were the words "Celebritarian™ used by permission". It has since been revealed through researching the databases and records of the United States Patent and Trademark Office that Manson coined and trademarked both the terms "Celebritarian" and "Celebritarianism".

On January 16, 2006, Marilyn Manson's official website was taken down and replaced with the following message on the front page which makes reference to the Celebritarian Corporation.

There has been much speculation over this as previously other updates had occurred on the website, starting on January 3. Each update has been archived and discussed by the online fan base.

The quote appears to be a paraphrase of a statement from Justice Jackson during the Nuremberg trials:

"This Tribunal, while it is novel and experimental, is not the product of abstract speculations nor is it created to vindicate legalistic theories."

Manson has said the reason he chose the name "Celebritarian Corporation" was because he believes that it provides "a further irony into what it represents".

The whole concept of Celebritarianism would be, ironically, a satire of today's civilization that focuses on celebrities; the more cameras looking at you, the more power you have in your hands. It would be about dying when everyone's watching; doing anything for fame. It's also about worshiping death in the media. The world knew about Harris and Klebold, the Columbine killers, half an hour after the tragedy. It's about how we give Lee Harvey Oswald and Mark David Chapman the status of celebrity by showing their masterpiece to the world. Celebritarian Corporation is about giving people what they feel guilty for wanting. It acknowledges our society's worst problem, guilt. This theme is also reminiscent of the very name "Marilyn Manson", which is intended to mock America's obsession with death. There are also strong hints of derivation from Romanticism, which Manson himself has referenced numerous times when discussing the Corporation and the then-upcoming album.

More about the meaning of the Celebritarian Corporation can be read in the interview Dramatic New Scenes for Celebritarian Needs.

Also, note a key phrase that appears on a shirt: "WE DON'T BELIEVE IN CREDIBILITY, BECAUSE WE ARE INCREDIBLE", a term that was later used in We're from America.

Below are a list of people who Manson has made mention to taking some part in the movement and its projects apart from himself. It is speculated that each member will oversee some artistic branch of the Corporation, such as Vivienne Westwood and John Galliano for textiles, Perou and Gottfried Helnwein for photographic endeavors, Angelina Jolie and Lily Cole (possibly also Tilda Swinton) for drama, et cetera. This pattern of duality, there being two artists for each branch, reflects the 'double-edged' nature of the Cross of Lorraine which is the movement's symbol, which Manson has modified and prefers to call the 'Double Cross'. Currently, only Perou has an explicit involvement with the movement, though Jolie, Swinton, and Cole have expressed their involvement with the cinematic elements of the movement. The fact that there are three actresses seems to mirror the Fates and Graces.

Manson has stated that the Celebritarian cross is slightly different from Cross of Lorraine as it is more symmetrical. He also feels that it is a representation of a lot of things they, the artists involved, identify with. Manson himself refers to the cross as "the double cross", which represents a concept of duality fundamental in Manson's body of work. However on his website he used an image of a knight who bears the Cross of Lorraine on him and not just a double cross. It should be noted that the cover of the unreleased companion novel to 2000's Holy Wood (In the Shadow of the Valley of Death) contains an implied "double cross".