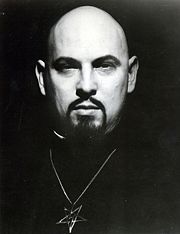 Howard Stanton Levey (born April 11, 1930, died October 29, 1997), better known as Anton Szandor LaVey was the founder and High Priest of the Church of Satan as well as a writer, occultist, musician, and actor. He is the author of The Satanic Bible and the founder of LaVeyan Satanism, a synthesized system of his understanding of human nature and the insights of philosophers who advocated materialism and individualism, for which he claimed no "supernatural inspiration". LaVey viewed "Satan" not as a literal deity or entity, but as a historic and literary figure symbolic of Earthly values.

LaVey was born in Chicago, Illinois to Gertrude Augusta Coulton and Michael Joseph Levey, a liquor distributor from Omaha, Nebraska. His family soon relocated to California where he spent most of his early life in the San Francisco Bay Area and later in Globe, Arizona. According to his biography, his ancestry can be traced to French, Alsatian, German, Russian, and Romanian stock. His parents supported the development of his musical abilities as he tried his hand at various instruments, his favorite being keyboards like the pipe organ and the calliope.

LaVey's biography tells of his dropping out of high school to join the circus and carnivals, first as a roustabout and cage boy in an act with the big cats, later as a musician playing the calliope. LaVey later noted that seeing many of the same men attending both the bawdy Saturday nights shows as well as the tent revival meetings on Sunday mornings supported his increasingly cynical view of religion. He later had many stints as an organist in bars, lounges, and nightclubs. While playing organ in Los Angeles burlesque houses, he reportedly had a brief affair with the still-unknown Marilyn Monroe as she was dancing at the Mayan Theater. This claim has been challenged by those who knew Monroe at the time as well as the manager of the Maya, Paul Valentine, who stated that she had never been one of his dancers nor had the theater ever been used as a burlesque house or for "bump and grind" shows.

According to his biography, LaVey moved back to San Francisco where he worked for a while as a photographer for the Police Department. He also dabbled as a psychic investigator, looking into "800 calls" referred to him by the police department. Later biographers have questioned whether LaVey ever worked with the police, as there are no records substantiating the claim. LaVey met and married Carole Lansing, who bore him his first daughter, Karla LaVey, in 1952. They divorced in 1960 after LaVey became entranced by Diane Hegarty. Hegarty and LaVey never married, but she was his companion for many years, and bore his second daughter, Zeena Galatea LaVey in 1964.

LaVey began presenting Friday night lectures on the occult to what he called a "Magic Circle" of associates who shared his interests. A member of this circle suggested that he had the basis for a new religion. On Walpurgisnacht, April 30, 1966, he ritualistically shaved his head, declared the founding of the Church of Satan and proclaimed 1966 as "the year One", Anno Satanas — the first year of the Age of Satan. Media attention followed the subsequent Satanic wedding ceremony of Radical journalist John Raymond to New York socialite Judith Case on February 1, 1967 (photographed by Joe Rosenthal). The Los Angeles Times and San Francisco Chronicle were among the newspapers that printed articles dubbing him "The Black Pope". LaVey performed Satanic baptisms (including one for Zeena), Satanic funerals (including one for naval officer Edward Olsen, complete with a chrome-helmeted honor guard) and released a record album entitled The Satanic Mass. 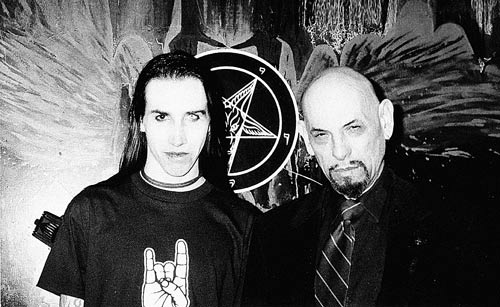 In the late 1960s and early 1970s LaVey melded ideological influences from Ayn Rand, Friedrich Nietzsche, Aleister Crowley, Mencken, and Jack London with the ideology and ritual practices of the Church of Satan into essays introduced with reworked excerpts from Ragnar Redbeard’s Might is Right and concluded it with "Satanized" versions of John Dee's Enochian Keys to create books such as The Satanic Bible, The Compleat Witch, (re-released in 1989 as The Satanic Witch, and The Satanic Rituals.

Due to his increasing visibility through his books, LaVey was the subject of numerous articles in the news media throughout the world, including popular magazines such as Look, McCall's, Newsweek, and TIME, and men's magazines. He also appeared on talk shows such as Joe Pyne, Phil Donahue, and Johnny Carson, and in a feature length documentary called Satanis: The Devil's Mass released in 1970.

Hegarty and LaVey separated in the mid-1980s, and she sued for palimony. The claim was settled out of court. LaVey's next and final companion was Blanche Barton, who bore him his only son, Satan Xerxes Carnacki LaVey on November 1, 1993. She succeeded him as the head of the Church after his death and has since stepped down from that role.

Anton LaVey died on October 29, 1997, in St. Mary's Hospital, San Francisco of pulmonary edema. He was taken to St. Mary's, a Catholic hospital, because it was the closest available. The time of his death was listed as the morning of Halloween, which has since, for reasons open to speculation, been determined to be off by two days. A secret Satanic funeral for LaVey, by invitation only, was held in Colma, and his body was cremated. His ashes were not buried, but were eventually divided amongst his heirs as part of a settlement, on the assumption that they possess occult potency, and can be used for acts of Satanic ritual magic.

On February 2, 1998, daughter Zeena LaVey and her husband Nikolas Schreck compiled and released Anton LaVey: Legend and Reality [1] which accused Anton LaVey of allowing for the sexual assault of Zeena's son Stanton LaVey (which Stanton denies having happened), falsifying information about his career and family life, and plagiarism. Zeena also contributed to an article on by D. Shawn Bosler titled The Devil in Disguise about the rumors of her father's release of organ music albums under the name "George Montalba." In response, Blanche Barton, Anton LaVey's biographer, released The Georges Montalba Mystery [2] countering these claims.

John Smulo, a known critic of Anton LaVey, has stated that, "Though LaVey justly charges that many Christians are guilty of hypocrisy, LaVey falls short himself. The sixth of LaVey's Eleven Satanic Rules of the Earth says, "Do not take that which does not belong to you unless it is a burden to the other person and he cries out to be relieved." Unfortunately, when it came to writing The Satanic Bible, LaVey hypocritically fell short of following his own rules. Smulo further claimed LaVey's most well known written work, The Satanic Bible relied heavily on many writers of a philosophical nature, most notably Ayn Rand, Friedrich Nietzsche, and Aleister Crowley. LaVey has stated that, "His religion was "just Ayn Rand's philosophy, with ceremony and ritual added.", though many say that 'he should be given credit for his creative synthesis of the thought of others into what has become the most influential statement of modern Satanism.' LaVey has denied claims of plagiarism in The Satanic Bible.