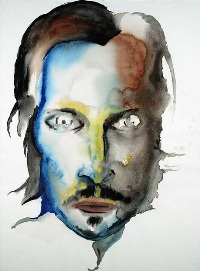 Vincent Gallo is a painting by Marilyn Manson. It depicts a portrait of an American filmmaker and film actor Vincent Gallo (Buffalo '66, The Brown Bunny). In January 2010 it was put up for auction on eBay for $2,500,[1] including a handwritten note from Gallo stating Manson and him were no longer friends and he didn't feel the need to keep the painting.[2] Gallo gave the painting to an ex bodyguard of Johnny Ramone who sold it on eBay. Gallo had previously owned another painting by Manson titled Springtime for Hitler which he also gave away and was also sold on eBay.