Hi. My name is Aldrich.

As of right now, my main preoccupation on this sites deals with the Marilyn Manson trilogy. I have particular interest in expanding and articulating the ☿ Holy Wood album and its concepts & influences most of all. It is mostly finished and I have begun focusing on Mechanical Animals.

Been a Manson fan since I was 12 which was something like in 1998. Incidentally, it was at that age that I bought my first album - Mechanical Animals. So I am a bit old-school in this regard. Partly by nostalgia, it is my favorite Manson record and partly by the fantastic production techniques of Michael Beinhorn, it is in my opinion the finest record the band has ever created. I still maintain it is also one of the best albums to come out of the 90's and one of the greatest of the glam rock genre.

What do you know, there are 4,140 articles on this wikisite. Fantastic. 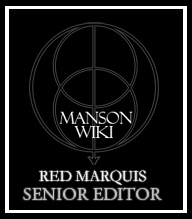