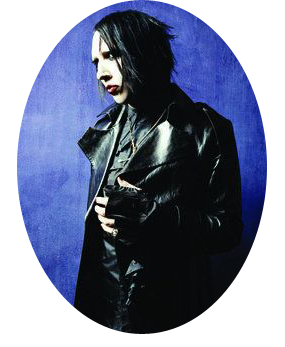 Welcome to the Marilyn Manson Wiki. This wiki's purpose is to help organize and record general and meticulous information regarding industrial rock band Marilyn Manson, by an encyclopedic standard. Contributions by visitors and registered users alike is encouraged. To edit, login or register if you haven't already. To just mess around, go to the Sandbox. New users of MansonWiki might be interested in checking out this short introduction to the site.

Jeordie Osborne White (born June 20, 1971), better known by his stage name Twiggy Ramirez, is a professional musician. He was the bassist of industrial metal band Marilyn Manson before moving on to A Perfect Circle in 2002, and Nine Inch Nails and Goon Moon in 2005. His stage name is formed from the names Twiggy Lawson and Richard Ramirez. He has also regularly contributed to the famed Desert Sessions recordings with Josh Homme of Queens of the Stone Age.

January 5, 2014 On behalf of the fans, Manson Wiki & Staff, we wish Marilyn Manson a Happy Birthday.

"The time is here." Marilyn Manson New Year's Eve post with an image of the Celebritarian Cross with the year 2014 mirrored on each side.

Marilyn Manson posted a pic from the movie "Wrong Cops" on facebook with the caption: 'Tonight at the Silent Movie Theatre. — with D.D.F.'

Site statistics show that the top 5 most viewed pages on MansonWiki currently are: