Michael Trent Reznor (born May 17, 1965), better known as Trent Reznor, is a professional musician. He is the founder and primary creative force behind industrial rock band Nine Inch Nails. He signed Marilyn Manson as the second (after Nine Inch Nails) act of newly-founded vanity label Nothing Records, and was the band's producer from 1994 until 1996. It was during that time that he and Marilyn Manson's friendship began to cripple, and after several fallouts, the two were revealed to no longer be friends by 2001.

Michael Trent Reznor was born in Mercer, Pennsylvania, halfway between Pittsburgh and Cleveland, to Michael J. Reznor and Nancy Lou Clark. Reznor was called by his middle name to avoid confusion with his father. After his parents divorced, Reznor and his little sister were sent to live with their maternal grandparents.

Reznor began playing the piano at the age of five and showed an early aptitude for music. In a 1995 interview, his grandfather Bill Clark remarked, "Music was his life, from the time he was a wee boy. He was so gifted." His former piano teacher Rita Beglin said "Reznor always reminded me of Harry Connick, Jr." when he played.

Reznor has repeatedly acknowledged that his sheltered life in Pennsylvania left him feeling somewhat isolated from the outside world. In a 1994 interview with Rolling Stone, he makes reference to his choices in the music industry, "I don't know why I want to do these things," Reznor says, "other than my desire to escape from Small Town, USA, to dismiss the boundaries, to explore. It isn't a bad place where I grew up, but there was nothing going on but the cornfields. My life experience came from watching movies, watching TV and reading books and looking at magazines. And when your fucking culture comes from watching TV every day, you're bombarded with images of things that seem cool, places that seem interesting, people who have jobs and careers and opportunities. None of that happened where I was. You're almost taught to realize it's not for you," however; Reznor continued: "I don't want to give the impression it was a miserable childhood."

At the Mercer Area Junior and Senior High Schools, Reznor learned to play the saxophone and tuba. He was a member of both the jazz and marching bands. Former Mercer High School band director Dr. Hendley Hoge remembered Reznor as "very upbeat and friendly." Reznor also became involved in theater while in high school. He was voted Best in Drama by classmates for his roles as Judas in Jesus Christ Superstar and Professor Harold Hill in The Music Man.

Reznor graduated from high school in 1983 and enrolled at Allegheny College, where he studied computer engineering, joined a local band named Option 30 and played three shows per week with them. After a year in college, Reznor decided to drop out to pursue a full-time career in music.

Reznor moved to Cleveland, Ohio. In 1985, he joined a band named The Innocent as a keyboardist. They released one album, Livin' in the Street, but Reznor quit after just three months. In 1986, Reznor appeared as a member of the fictional band The Problems in the film Light of Day. He also joined a local Cleveland band called the Exotic Birds.

He got a job at The Right Track (Cleveland/ not N.Y., now known as Midtown Recording) as a engineer (and handyman like everyone else that worked there). Studio owner Bart Koster commented how Reznor "is so focused in everything he does. When that guy waxed the floor, it looked great." Koster allowed Reznor to use the studio during off hours, which he used to record demos for songs that ended up on Nine Inch Nails' first album, Pretty Hate Machine. These demos were later released as a self released bootleg under the name Purest Feeling.

Reznor was the credited producer for Marilyn Manson's albums Portrait of an American Family, Smells Like Children, and Antichrist Superstar, as well as the soundtracks for the films Natural Born Killers and Lost Highway. Reznor is credited for "Driver Down" and "Videodrones; Questions" on the soundtrack for Lost Highway. One other track, "The Perfect Drug" is credited to Nine Inch Nails instead.

Reznor likes video games, most notably Doom by id Software, which he has said he played on the Nine Inch Nails tour bus after doing shows. He also created the soundtrack for id Software's hit Quake. The NIN logo also appears on the nail gun ammo boxes in Quake and prior to this, embedded in both the floor and ceiling of a secret room in Ultimate Doom. 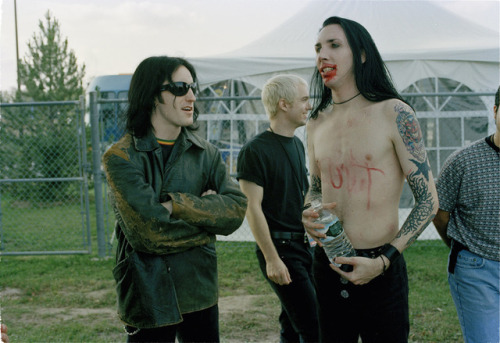 Trent returned to work with id Software in 2003 as the sound engineer for video game Doom 3. However, due to "time, money and bad management", he had to abandon this project, and his audio work did not make it into the game's release. The original audio files can be found on the Internet, although they are not officially endorsed by Reznor nor id Software. Chris Vrenna, on again off again drummer for Nine Inch Nails, produced the music for Doom 3 with his partner Clint Walsh.

During the five years between his albums The Downward Spiral and The Fragile, Trent Reznor struggled with depression, social anxiety disorder, writer's block, and the death of his grandmother. It has also been revealed by Reznor that he had been suffering from alcohol and drug addiction during The Fragile era.

In a 2005 interview with Kerrang!, Reznor makes a note of his self-destructive past, "There was a persona that had run its course. I needed to get my priorities straight, my head screwed on. Instead of always working, I took a couple of years off, just to figure out who I was and working out if I wanted to keep doing this or not. I had become a terrible addict; I needed to get my shit together, figure out what had happened." In contrast with his former suicidal tendencies, the song artist admitted in a 2005 interview with Revolver that "I'm pretty happy right now," adding "Wait! Don't print that! You'll ruin my reputation. At least lie and say that I've got a dead body in my closet or something."

Reznor was involved in a feud with the band Limp Bizkit (specifically their frontman Fred Durst) in the late 1990s, around the height of their popularity, calling Durst a "moron" and saying in a 1999 interview in Rolling Stone magazine, "Let Fred Durst surf a piece of plywood up my ass." It is noted, however, that Reznor is credited as a writer of the song "Hot Dog" on Limp Bizkit's album, Chocolate Starfish and the Hot Dog Flavored Water. This is due to this song's use of lyrics from the Nine Inch Nails song "Closer", in particular the phrase, "I want to fuck you like an animal." Reznor was put in the difficult position of having to give permission for his own lyrics to be used in a song mocking him but interviews at the time suggested that he thought it was best to allow permission rather than drag the issue out."

Tapeworm, a collaboration with Danny Lohner, Maynard James Keenan of Tool, and Atticus Ross of 12 Rounds, was in production for almost ten years, but an update on the official Nine Inch Nails website declared that the project had been terminated. The only known performance of any Tapeworm material was when Keenan's other band A Perfect Circle performed the song "Vacant" on tour in 2001. "Vacant" appears on A Perfect Circle's third album eMOTIVe, reworked and retitled "Passive".

Saul Williams toured with Nine Inch Nails in 2005 and 2006. Reznor was also the co-producer of Williams's latest album The Inevitable Rise and Liberation of NiggyTardust! The album was released in November of 2007.

A DVD taken from two "Live: With Teeth" tour dates on March 28 in Oklahoma City, Oklahoma, and March 30 in El Paso, Texas entitled Beside You In Time was released in the US on February 27, 2007 on DVD, HD DVD, and Blu-Ray formats. A teaser trailer was released via his official website on September 23, 2006.

Reznor recently finished working on a new Nine Inch Nails album, entitled Year Zero, which was released on April 17, 2007. He is currently touring the album throughout the world.

On March 2nd, 2008, a collection of experimental instrumentals were released in a two-disc record called "Ghosts I-IV". And then on the 5th of May, 2008, Reznor released a digital copy of the new Nine Inch Nails record, "The Slip", totally free of charge, stating - "Thank you for your continued and loyal support over the years - this one’s on me."

Recently, Reznor formed a new three-piece musical outlet with his wife, Mariqueen Maandig-Reznor and Atticus Ross. The project is known as How To Destroy Angels and will release their debut self-titled EP in Summer 2010. 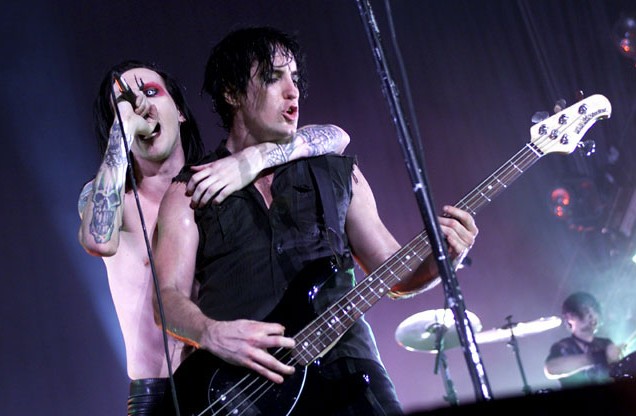 Manson singing "The Beautiful People" with Trent Reznor during Fragility v2.0 on May 9th, 2000 at Madison Square Garden.

In 1997, Marilyn Manson was tapped to produce the soundtrack to the film Lost Highway. Reznor would end up getting the job, a move that Manson found hard to forgive. Over the next two years, Reznor and Manson exchanged harsh words but in 2000 they seemed to reconcile their differences, citing what they perceived as a threat to modern music: the resurgence of boy bands and the rise of "nü-metal."

The first sign of this reconciliation was Manson's presence and co-directing credit for Nine Inch Nails' "Starfuckers, Inc." music video. Later that year, Manson made a surprise appearance at Nine Inch Nails' concert on May 9th, 2000 at Madison Square Garden in New York City, joining the band at the end of "Starfuckers, Inc." before performing "The Beautiful People." The reconciliation did not last long, however, as soon after they were once again exchanging barbs at each other through the press and their websites.

Reznor and Manson continue their feud. Reznor has called Manson "unhealthy to be around" while Manson doesn't understand why they're fighting but adds that he's more "dangerous" than Reznor despite Reznor's muscle gain in recent years. It is widely believed that Manson's drug and alcohol consumption are a major factor in Reznor's unwillingness to reconcile.

In 2004, Reznor made a negative remark about Manson on a fan access questionaire:

Recently in early 2009, Trent was quoted calling Manson a "dopey clown" and that his skills and wits of writing have been dulled due to substance abuse, though firmly believes he has a good talent. Manson responded by making a passing mention and a joke about the nickname later on in the summer in an interview.

In an interview in January 2011, Reznor was asked if he would ever work with Manson again. He responded by saying he's open to anything and that his former protege “is a talented person” and that “we’ve had our problems, but I wear suits… I'm an adult now” with a priceless smirk on his face.

In a 2012 interview with AZ Central when asked about if a future box set was able to be released without any issues with Interscope Records and Reznor, Manson stated 'No. That part of the whole record deal on our end is through. The only unfortunate part of that is that some of the mixes have been destroyed. But he didn't destroy the mixes I care about. I don't have any bad feelings towards him. I really don't. He helped put me out into the world and I went my way and whatever happened happened. I don't think you should go back and fix things that have already been done anyway.' When asked if there would be no hard feelings if Reznor and Manson did cross paths, Manson said 'No. I don't think there is tension. I don't think we ever really had a lot in common. We had a certain sense of humor in common. He was always more of the jock and I was more of the burnout.'