Those Bits Down Below Are Gristle 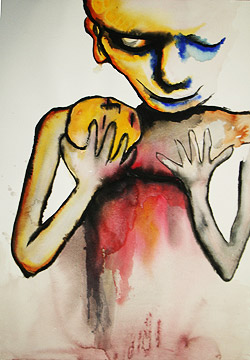 Those Bits Down Below are Gristle

Those Bits Down Below are Gristle is a painting by Marilyn Manson. One thought is it depicts a portrait of a Sissyphus styled character holding fruit in a pose similar to the figure depicted in the painting The Apple Falls Far.

Another, that the character is holding a baby and ready to take a bite. This could be reminiscent of the painting by Spanish artist Francisco Goya named "Saturn Devouring His Son" which is a Romanised story based on a Greek myth of the Titan Cronus. According to the Romanised Greek myth, it was foretold one of Saturn's sons would overthrow him just as he had overthrown his father, Caelus. To prevent this, Saturn ate his children moments after each was born. His wife Ops eventually hid his sixth son, Jupiter, on the island of Crete, deceiving Saturn by offering a stone wrapped in swaddling in his place. Jupiter eventually supplanted his father just as the prophecy predicted.[1]

This piece is available on marilynmanson.com paintings.