For the single see The Nobodies (single)

"The Nobodies" is the third and final single and the tenth track of the fourth album Holy Wood (In the Shadow of the Valley of Death). The song was inspired by the Columbine massacre which took place on April 20, 1999. Also, the title was taken from statements made by Mark David Chapman, John Lennon's assassin, stating that he "felt like a nobody." 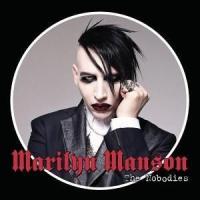 Manson dressed in a devil-like costume in the music video

The music video for "The Nobodies" was directed by Paul Fedor.[7] It premiered on MTV in June 2001.[7] Technical presentation of the video uses shaking camera techniques, varying perspective shots, closeups, and fast scene shot changes.

Originally, the frontman expressed desire to film the music video in Russia "because the atmosphere, the desolation, the coldness and the architecture would really suit the song."[1] Another concept called for the incorporation of the MTV stunt and prank reality TV series, Jackass, due to the song's inclusion in the Jackass soundtrack.[7] However, this idea was abandoned after the show began drawing the ire of U.S. Senator Joseph Lieberman (D-Conn.), who was among the politicians who targeted Marilyn Manson for blame after the Columbine High School massacre.[7][8] Marilyn Manson explained the idea for the music video thus,

The music video begins with children being watched by two oddly dressed, elderly characters with peculiar headsets on. The children seem to be mesmerized by a television showing nothing but static, however their guardians turn it off. Manson is seen in many forms throughout the video, including a devil-like costume in which he appears in when indoors. As the chorus hits, one of the children finds a concealed passageway leading to a snowy forest area where Manson dressed as a tree-like humanoid (as depicted on the single's cover) is singing with the rest of the band behind him. Manson and the children's oppressors begin to have some sort of confrontation as the setting returns back indoors; he pours money from a hollow deer head and scatters it on the floor as the pair kneel down to gather it (this seems to be a trap of Manson's, as when they are kneeling, root-like objects begin to drag them away). Another variation of Manson is later seen, it is similar to the tree-like appearance, though lacking branches and possessing exposed feet in contrast to them being connected to the ground. During the conclusion of the video, Manson and the children are waiting by a machine that is being fed the bodies of the victims of Manson's trap by using the long branches to bring them in. The machine transforms them into a grotesque pie, which the group then begins to eat at a dinner table. The music video has appeared in three forms: the original video, the Against All Gods Remix version (which is nearly identical to the original, however, any scenes of the band members, other than Manson himself, have been replaced with different footage), and the Burn 69 Remix version, which is interspersed with scenes of the movie From Hell.

The video itself seems to contain a vast amount of symbolism. It attempts to expose the controlling and aggressive behavior of the media and religion, a common theme throughout the "Holy Wood" era. The "elderly characters" have costumes that seem to be parodying that of religious figures, and dominate the lives of the depraved children. When the children are discovered to be missing, these characters begin to search for the children using guard dogs and are seemingly intimidated by Manson (this scene can be seen as a possible display of how sheer hostility is used to control and instill fear in others). Upon Manson's appearance, they immediately bend down to kiss his ring and are easily pleased by his donation of money (a sign of their greed and obsession with riches). Manson acts as the savior of the children, shielding them inside his cloak and destroying their tyrannical guardians. The video slightly corresponds with the lyrics of the song (both dealing with media violence), though bears no references to the Columbine High School Massacre, which serves as the primary example of this violence in the lyrics.