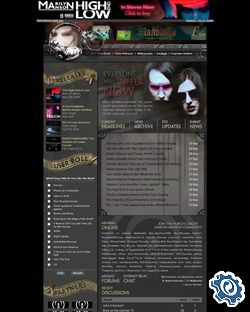 The website's homepage, towards the end of its lifespan.

The Heirophant, also known as MansonUSA, was a significant Marilyn Manson fansite which ran between February 14, 2001 and June 19, 2009. The website was founded by Alexander Henken, better known by his screen name filicide, and through its growing popularity among the band's fan community, both Henken and The Heirophant itself became associated with the band's frontman, Marilyn Manson. In more recent years however the website's forum, dubbed The Heirophant Council, became a notorious place where both administrators and regular visitors alike openly criticized Marilyn Manson in addition to, ironically, the band's fanbase. This is partially believed to be the cause for why The Heirophant became defunct in June 2009, after roughly eight years of activity. During its time, The Heirophant was the undisputed largest Marilyn Manson database online, however since disbanding, the band's fan community have looked to build stronger and more civil forums, such as Babalon and Provider Module, and strengthen already existing fansites such as The Nachtkabarett and MansonWiki.

The Music Netwurk, the precursor to The Heirophant.

Before The Heirophant's conception, webmaster Alexander Henken maintained The Music Netwurk, a hub for Slipknot and Nine Inch Nails fansites. When the release of the latter fansite, Systematic Decline, proved popular, Henken decided in October 2000 to add a third fansite to The Music Netwurk, this one covering Marilyn Manson. During development, the Marilyn Manson site went by the name Of Red Earth: The Infocenter, but was changed to The Heirophant months before launch. The Heirophant was the product of Henken's boredom in the winter of 2000, and as he experimented with the website's basic framework, he realized it was unrealistic to maintain three fansites. Henken shut down The Music Netwurk and chose to focus solely on preparing the launch of The Heirophant.

After Henken completed The Heirophant's basic layout, the owner of a small music network, Rmp3, took notice and offered hosting for the website, "a welcome change from our humble hosting beginnings at Geocities." Henken launched the website on February 14, 2001 and as promised, Rmp3 hosted The Heirophant, alongside another Marilyn Manson fansite, Marilyn Manson Online. Shortly after the launch, Rmp3 was shut down due to violating its own host's terms of service. Henken's vision was saved by another music network, Get Some Noise, which hosted The Heirophant at the domain www.mansonnet.com.

The second version of The Heirophant.

With Marilyn Manson Online out of a host, its own webmaster joined the staff of The Heirophant, making the website less difficult to run between two people. Months later, The Heirophant began to experience periods of downtime which Henken surmised was a result of their hosting not being paid. After two weeks of downtime, Henken terminated his affiliation with Get Some Noise. Hesitant to accept another outside hosting offer, Henken opted to pay for hosting himself, purchasing an account with 10 gigabytes of bandwidth. The Heirophant being offline for nearly a month, Henken decided to prepare a new version of the website for its return to the public eye, adding "a more functional design, "an abundance of content within" and "new PHP coding architecture which made transfers and requests faster on the user end, while making it easier to update from the administrative end." The second edition of The Heirophant was launched on May 10, 2001.

A month after The Heirophant resurfaced, Henken began working on a backend engine for the website, an update which would make maintaining the website easier. The third edition of the website was launched on August 5, 2001, adding some features to the site's existing sections, but including minimal content upgrades. By this time, The Heirophant's popularity began to grow exponentially.

After six months, Henken plotted to revamp The Heirophant with a JavaScript-powered layout, "to increase ease of use and allow more free space to display content." By this time, Henken's co-webmaster, Joey from the late Marilyn Manson Online, had lost interest in Marilyn Manson and left Henken to maintain The Heirophant. He was replaced by long-time Heirophant supporter Strife, later known as Heresy. With The Heirophant two years in operation, Manson himself recognized the website by allowing Henken an interview in July 2002, which was picked up by MarilynManson.com, Gottfried Helnwein's website and several others, which largely contributed to a heightened success. The Heirophant was the first and only fansite to conduct an interview with Manson. 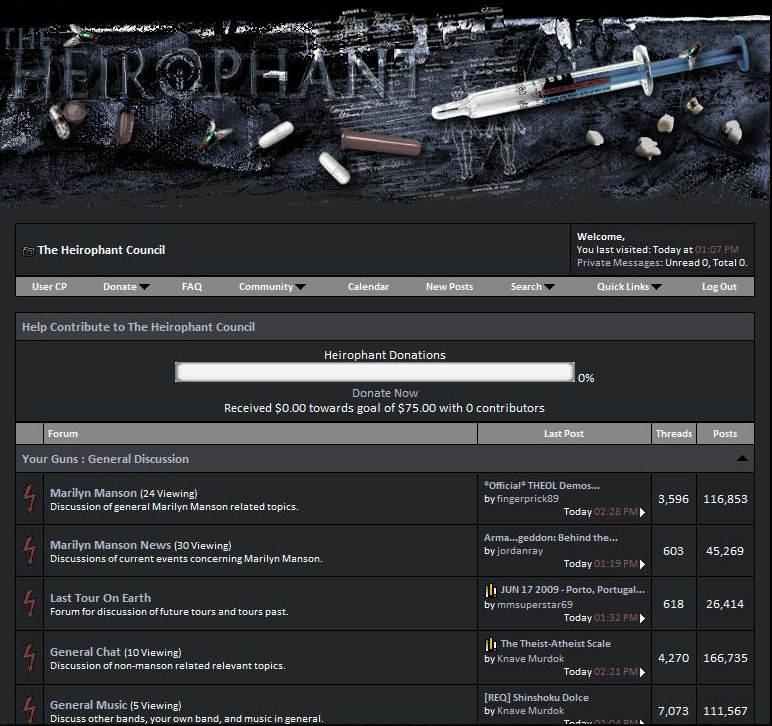 The Heirophant Council in April 2009.

The following year, Henken interviewed former bassist Gidget Gein, soon after which The development of The Heirophant's fifth edition, codenamed Metamorphosis, began. Henken's goal this time was to improve the accessibility of the website while aiming to make its interface more visually pleasing. To accomplish this, Henken improved the interface with Marilyn Manson imagery and had the website's library of content overhauled with new information. The JavaScript navigation was swapped for one using Flash, and the graphics were generated using Adobe Illustrator 8.0, Adobe Photoshop 7.0 and Adobe Image Ready 7.0; coding was done using Notepad, which Henken had been using to write the site since the beginning. This version of the website launched on April 4, 2004 with The Heirophant's third exclusive interview. This time, bassist Tim Skold spoke to Henken.

While The Heirophant's popularity continued to grow, Metamorphosis was the final version of the site Henken designed. By 2008, Henken had spoken to Manson three more times, in interviews entitled "Dramatic New Scenes for Celebritarian Needs," "Red Carpet Grave" and "Everyone Will Suffer Now." Over the next year, The Heirophant's forums grew controversial for its users, renowned for their hostility towards each other, who now mocked and lambasted Manson.

The Heirophant was shut down on June 19, 2009. Rumours persist that this was due to personal intervention by Manson. That day, Nick Kushner, manager of The Nachtkabarett, issued a statement concerning the reasons for The Heirophant's closure.

this is not an official statement from Manson but rather informing many of you on some current events. a five page grocery list in small type of further reasons for this could be discussed, but won't. at current. however should various parties continue to fuck with Manson without provocation (not even including everything done and said about myself for no reason over the past 4 years, and am remaining objective in this situation) such information may be addressed in a public light. a brief statement though is in order before the Katrina shit-storm is full under way.

whether it was genuine or merely a sympathy ploy to "leave" and "sell" the domain name Mansonusa.com, it had become readily apparent that the site owners and administrators were using it for nothing more than an invisible mouthpiece as public slander and defamation against Manson, exploiting his very name (ie - MANSONusa.com) to accomplish this. for example, it's clever enough to tag over 200 threads with the byline of "(Manson does coke)", deliberately using parentheses so that in every such thread it will be the first to appear. but the story rings quite differently when each and every thread pertaining to the new tour contains the tagline "ihopetheyshoothimonstage". when this is directed towards an artist who HAS had thousands of death threats and who has had friends who have actually been shot onstage, ie - Dimebag Darrell, what may be construed as tongue-in-cheek had slowly escalated and reached the point of crossing the line and had become what is absolutely libelous and criminal. and in a court of law ; absolutely yes. let's remember, all it took was a neighbor's fucking dog barking allegedly Satanic messages for David "Son of Sam" Berkowitz to kill and wound 13 people throughout New York City in the late 70's.

in the past 24 hours the said site moderators and administrators had apparently gotten wise to the gravity of these implications and had changed "(Manson does coke)" to "(Manzin drinks diet coke)". cute and quaint, yes, but this was nothing more than a coy and disingenuous temporary (and poor) reneging on something which they themselves started. all of this and hundreds more has been documented and screen captured, time-stamps included, with who posted what if any of this ever becomes required for future use.

the internet is not a toy which one can sit reclined at their leather deskchair with a pizza in one hand, a diet coke on the table, in their underwear and continually harass under the assumed cloak of anonymity. even aside from it being documented and fully apparent who was behind this current situation. you do not need a million dollars or be a rockstar either, you only have to know your rights and realize when others begin to feignly believe they have the right to infringe upon your's. this was a case of using Manson's name, image and art, along with a status previously entrusted to the site administrators out of good faith which was was only abused by using that status(which was obtained by links, search engine placement, interviews and traffic directed towards to site, ect) for the purpose of public defamation, threats and attempt to steer the entire fan community toward a negative bias against the artist whom they were gathered to venerate, allegedly at one point. one needs only browse a handful of random threads there to realize this was the case but this by no means will imply that Manson has any ill feelings towards the many, many, many fans there who were 110% genuine. unfortunately the bullies ran the broken down playground when there was little elsewhere to play.discussion on this matter will remain closed, as to prevent this from devolving from vindication into a bitch pissing contest, and further statements, if deemed necessary to occur, should only be from Manson himself and not you or i. furthermore, expect a 'Message Board' link to appear on MarilynManson.com which will direct to our new home here.

During The Heirophant's activity, Henken conducted four interviews with Manson, and one each with Skold and Gein. The website was the largest and most reputable Marilyn Manson fansite on the Internet, and its merchandise included a smoke-colored T-shirt sporting the site's symbol, which represented "two separate entities distinguishable by observing the symbol at different perspectives. We choose not to elaborate any more than that."