The Golden Age of Grotesque (album)

From MansonWiki, the Marilyn Manson encyclopedia
(Redirected from The Golden Age of Grotesque)
Jump to: navigation, search

The Golden Age of Grotesque is the fifth studio album by Marilyn Manson, released on May 5, 2003 by Interscope Records. It incorporates themes from the glamorous Swing era of the thirties, as well as from the Weimar Republic of pre-Nazi Germany.[1] It spawned two singles ("mOBSCENE" and "This Is the New Shit"). It was revealed in a 2007 interview with Kerrang! that this was intended to be Marilyn Manson's departure from music, however his divorce drove him to write the album's successor, Eat Me, Drink Me.

In a November 2001 post by Manson on MarilynManson.com's message board, Manson stated that the band's fifth studio album would be "very much guitar driven" and heavy, in spite of previous claims that it would be beat-oriented. He also revealed that he had been working on a song with Slipknot drummer Joey Jordison, and that he was collaborating with Tim Skold, who at this time was not a member of the band.[2]

Beginning May 2002, the Austrian-Irish artist Gottfried Helnwein collaborated with Manson on the album. [3] The cover and the artwork inside the album sleeve was created by Helnwein, and this artwork was also shown in his exhibitions. Limited edition units included a DVD titled Doppelherz (Double-heart), a surrealist short film directed by Manson.[4]

Instrumentally, this album is more beat-driven and electronic than previous albums. This is perhaps due to Tim Skold's presence — some believe this album's sound is at times reminiscent of KMFDM, with whom Skold had collaborated prior to recording with Manson.

Lyrically, this album is full of historical and pop references, much like Holy Wood (In the Shadow of the Valley of Death). References include Peter Pan, Adolf Hitler, and Oscar Wilde. As in many of his other works, he makes use of word play and double-meanings, coining words like "gloominati", "scabaret sacrilegends", "vivi-sex symbol", "cocaingels", "mOBSCENE", "vodevil" and "para-noir". 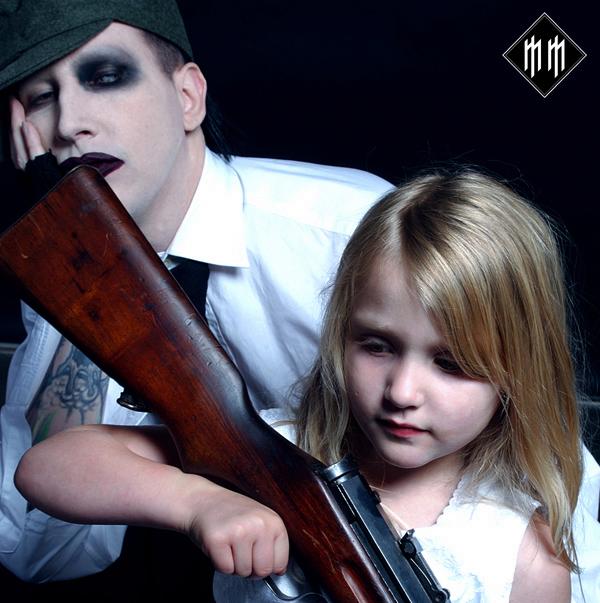 A photograph, from a set of four, created in 2003 by Gottfried Helnwein to accompany Manson's essay for The Rock and Roll Hall of Fame and Museum.[3][5] Helnwein expressed disappointment that none were selected as the new album cover.[6]

The most enduring theme is chiefly notable in the single "This Is the New Shit". The song was seen as poppy, with the chorus - and title - possibly referring to the fact that Tim Skold had joined the band, bringing with him a completely new and different style of music. While on the surface this could be regarded as Manson's attempt at a mainstream sound, the song in fact is railing against contemporary music ( i.e., 'the new shit') and goes so far as to spell out the what Manson viewed the formula for mainstream success to be:

The album can be taken on two levels: first as a soundtrack of rebellion preaching the notion of living life to its fullest. The second takes a parody to the idea that living life to the fullest has led us into a nihilistic stupidity, hence the "rebel to sell" references within "The Bright Young Things" and the transformation into a commercially acceptable "happy" icon, Mickey Mouse (Manson posed as Mickey Mouse throughout the album's publicity).

Barry Walters of Rolling Stone commented "Marilyn Manson really should be sucking by now...what's surprising is that there's still so much life in what Manson is rehashing. Originality has never been his forte, but this walking sound bite excels at absorbing what's out there and distilling it through his anti-charisma until it's simultaneously fresh and putrid...the album loses momentum as the songs slow and dull down, but the first half of Grotesque shines brighter than it should."[10] The album met with modest commercial success. It debuted at № 1 in the United States, selling over 120,000 copies in the first week, but was the lowest selling № 1 album of the year. As of November 2008, the album has sold 526,000 copies in the United States.[12] The album drew a mixed critical response. Although ending up in many critics' 'best of' lists for 2003, other critics consider this Manson's weakest album, arguing that it lacks originality and thoughtful lyrics compared to its predecessors.

The song "Use Your Fist and Not Your Mouth" was featured in the 2003 video game Spawn: Armageddon and the 2005 videogame Cold Fear.

Grotesk Burlesk was the ninth tour Marilyn Manson embarked on, under management of major record label Interscope Records. It was also the band's fifth tour to span over multiple legs. The band was on the tour from April 11, 2003 until January 3, 2004.

Much of the costumes and attire used for the tour was tailored by French fashion designer and grand couturier Jean-Paul Gaultier.[13][14]

THE CAST: MARILYN MANSON as himself and also known or referred to as "Herr Doktor". This is the creator of all vocals and OB ART manipulator of various instruments including: a burning piano, synthetic bass, mellotron, the saxophone and the mutilation of audio for personal use. He maintained some rhythm directive including (but not limited to) loops and snare drum rolls. There were also occasions where the one string guitar was implemented for dramatic purposes. JOHN 5 AS THE LEAD GUITARIST DEMAGOGUE: HE IS RESPONSIBLE FOR RHYTHM, LEAD AND DISSONANCE IN THE FIELD OF GUITARS (INCLUDING BUT NOT LIMITED TO) THE 5, 6 AND 7 STRING INSTRUMENTS. PIANO AND VARIOUS ORCHESTRAL ELEMENTS WERE ALSO CHOREOGRAPHED BY HIM USING HIS GUITAR IN A MANNER OFTEN VIEWED AS INNAPPROPRIATE. M.W. GACY as the chief chemist and philosopher of electronics, specializing in the field of keyboards and responsible for synthesizers, discoloration of words, loops and political melody. INTRODUCING: TIM SKOLD WHO STARS AS THE BASSIST. HE IS THE SHAPER OF ELECTRONICS, LOOPS, SYNTH BASS, KEYBOARDS AND ACCORDIAN. HE ALSO IS RESPONSIBLE FOR OB ART CONSTRUCTIVISM OF GUITAR AND BEAT. GINGER FISH AS THE LIVE DRUMMER AND PRIMAL METER INTERPRETER. LEADER OF ALL RHYTHM DIVISIONS OF MARCHING AND BIG BAND KORPS.

For further reading and in depth analysis refer to The Nachtkabarett:Art & The Golden Age & The NAchtkabarett:Degenerate Art & Fascism