The Death of Art

For the song see Obsequey (The Death of Art) 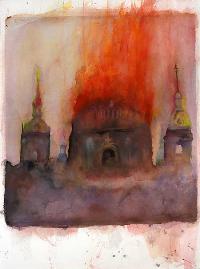 The Death of Art

The Death of Art is a painting by Marilyn Manson. The painting depicts a building with twin towers on each side burning. The facade of the main building looks like an angry howling face.

One theory is it's a landscape portrait depicting the Duchess Anna Amalia Library in Weimar burning. The fire, with its destruction of much historical literature, amounts to a huge cultural loss for Germany, Europe, and indeed the world. A number of books were shock-frozen in the city of Leipzig to save them from rotting.

Another is that in 2003, Manson was quoted saying: "We set forth to the Dome of Berlin at dusk and I felt like I was in my own painting, "The Death of Art."[1]. The Dome of Berlin, pictured, is a nickname for the Berlin Cathedral which was bombed first in 1940, then again in 1944 a bomb of combustible liquids entered the roof lantern of the dome. The fire could not be extinguished at that unreachable section of the dome. The Berlin Cathedral is listed in "The Universal History of the Destruction of Books: From Ancient Sumer to Modern Day Iraq[2] as being a major loss of books and works of art.

The painting is featured on the inlay of the 2004 compilation Lest We Forget: The Best Of.