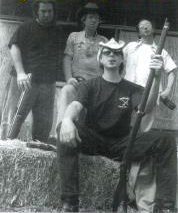 Stuck on Evil was formed in 2000 by Daisy Berkowitz and Rich Penny after, as a reestablishment of former project Rednecks on Drugs. Their plan for a national tour starting in August of 2001 was ruined, however, by September 11 and a bone-breaking accident on the part of vocalist John Cain Riley. Following the September 11, 2001 attacks, and the subsequent condemnation of "evildoers" by President George W. Bush, the band decided to drop the word "evil" from its name.