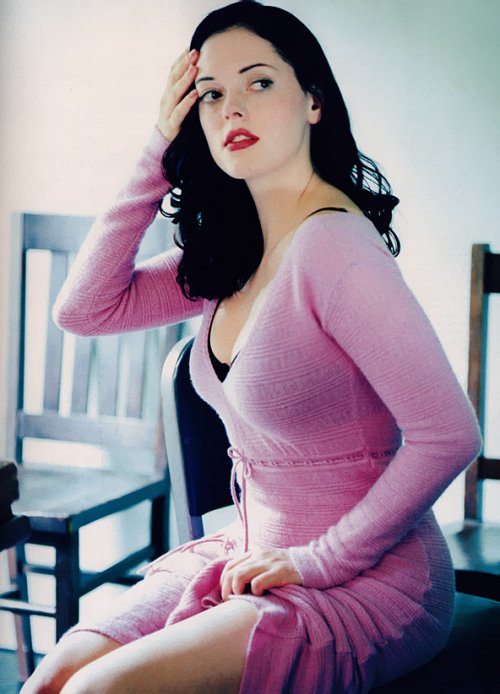 Rose Arianna McGowan (born September 5, 1973, age 48) is an American film and television actress. She is best known for her role as Paige Matthews in The Warner Bros. television series Charmed and the cult-classic The Doom Generation. She has also appeared in several major Hollywood films, with leading roles in Scream, Jawbreaker and the Quentin Tarantino/Robert Rodriguez double-feature Grindhouse. She was the girlfriend of Marilyn Manson from late 1997, through their engagement the following year, to their break-up in late 2000 over "lifestyle differences".

McGowan is the second-eldest of six children (plus two half-siblings), born in Florence, Italy to Terri, an American writer of French descent, and Daniel McGowan, an Irish-born artist. Daniel McGowan ran an Italian chapter of the Children of God to which both he and his wife held membership until 1978. McGowan spent her early childhood amid the group's communes, often traveling Europe with her parents. Through her father's art contacts in Italy, McGowan became a child model and appeared in Vogue Bambini and various other Italian magazines. Her parents returned to the United States in 1979 and divorced when McGowan was 10. She subsequently relocated to Oregon and then Gig Harbor, Washington where she also met childhood friend actor Rey-Phillip Santos. McGowan did not speak English until she moved to the United States.

McGowan's formative years were spent with her father in Seattle, Washington attending Roosevelt High School and Nova Alternative High School. At the age of 16, McGowan officially emancipated herself from her parents. She pursued a possible career in the film industry during her late teens, and also enrolled in a beauty school as a back-up. 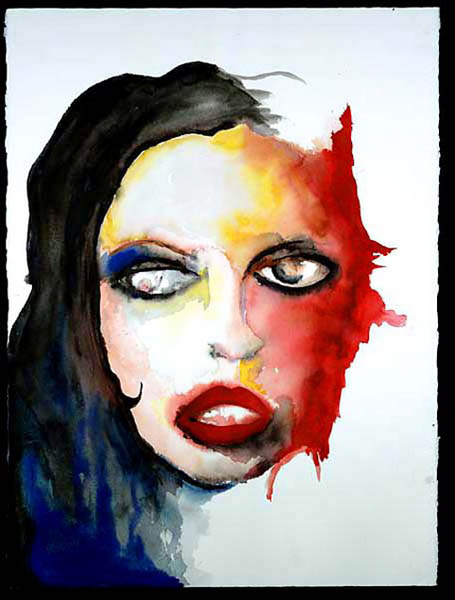 By Any Other Name, a portrait of Rose McGowan painted by Manson

McGowan used to live in Seattle, Washington, but currently resides in Los Angeles, California. She was in a very public four-year relationship with shock-rocker Marilyn Manson, and often appeared with him at celebrity events in extremely provocative clothing, such as the chain-mail transparent dress and thong she wore to the 1998 MTV Video Music Awards. McGowan later ended their year-long engagement over "lifestyle differences". She has since gone on to have relationships with fellow actor Kip Pardue, TV personality Ahmet Zappa, and Men's Health magazine editor David Zinczenko. Prior to the release of Grindhouse, there was speculation that McGowan was dating director Robert Rodriguez. In May 2007, it was reported that they confirmed their relationship while appearing hand-in-hand at the Cannes Film Festival. Currently she's engaged to Robert Rodriguez.

McGowan has admitted to sleepwalking as a child. "The weirdest spot I ever woke up was a snow bank in Montreal. Now I just speak Italian in my sleep."

McGowan is known as an activist for Boston Terriers. She herself has two, Bug and Fester, and has personally donated to various Boston rescues. McGowan reportedly encouraged friends to donate to Boston Terrier Rescue Net, and according to BTRN: "Having fallen in love with Bug and Fester, her friends donated generously. It amounted to a considerable contribution, which will go a long way in helping BTRN and the needy volunteers who selflessly give to deserving Bostons."

McGowan and a friend have recently started selling their own line of Pinken Mint purse caddies, which are hooks used to hang handbags from tables and chairs in restaurants as an alternative to resting them on possibly unclean floors. Celebrities such as Keira Knightly, Carmen Electra, and Virginia Madsen have been known to use the caddies.

According to an article in the New York Post, McGowan experienced serious injuries in a car accident early in 2007. Riding as a passenger, her car was struck by another vehicle and the force of the impact drove her eyeglasses into her face. McGowan is quoted as saying, "I didn't realize I was hurt until I put my hand to my face and felt the flap of skin. My glasses had sliced me under my eye". After obtaining the services of a plastic surgeon, McGowan is reported to be suffering no long-lasting consequences from the incident.

Her straight-forward, take-it-as-it-comes persona is reflected in her acting method. "I'm not really one of those people who goes and writes some big back story and agonizes over characters... For me personally, it's just kind of more instinctive. But I don't have kind of an acting background. I fell into it accidentally."

McGowan made her first appearance in a Hollywood film with a bit role in the 1992 Pauly Shore comedy Encino Man. Her role in the 1995 black comedy, The Doom Generation, brought her to the attention of film critics, and she received a nomination for "Best Debut Performance" at the 1996 Independent Spirit Awards. McGowan was subsequently cast as Tatum Riley, the best friend of Neve Campbell's character Sidney, in the 1996 hit horror film Scream.

McGowan spent the majority of the 1990s appearing in low-budget and independent films, including roles in Southie, Going All the Way and Lewis & Clark & George. She appeared in the critically-acclaimed short Seed, directed by San Francisco-born filmmaker Karin Thayer, in 1997, and played opposite Peter O'Toole in the 1998 film adaptation of the Dean Koontz novel Phantoms. Notably, McGowan also starred in the 1999 comedy/drama Jawbreaker, where she played a high school student who tries to cover up a classmate's murder. That role earned McGowan a nomination for Best Villain at the 1999 MTV Movie Awards.

In 2001, McGowan was cast as Paige Matthews in the popular Warner Bros. television series Charmed, as a replacement lead actress after Shannen Doherty's dismissal from the show. She was offered to be a producer after the seventh season, but turned it down. The series ended its run on May 21, 2006.

In May 2005, McGowan portrayed actress/singer Ann-Margret in Elvis, a Golden Globe-winning CBS mini-series about the life of Elvis Presley. That same year, she lent her voice to the video game Darkwatch as a femme fatale named Tala. The game was published by Capcom for PlayStation 2 and XBox.

According to Variety, McGowan has signed on to play the tragic B-movie staple Susan Cabot in the upcoming film Black Oasis. Director Stephan Elliott (Priscilla, Queen of the Desert) has penned and will direct the film based on a Premiere magazine article by John H. Richardson. Shooting will begin fall 2007.

During a press junket to promote Grindhouse, when asked whether rumors were true that McGowan would appear in the upcoming Sin City 2, a smile was the only reply. Although recent reports claim McGowan would be cast in Robert Rodriguez's upcoming Barbarella remake, no official confirmation has been reported.

McGowan was the face of American clothing company Bebe from 1998 to 1999. She was also the cover model for the Henry Mancini tribute album Shots in the Dark, which was released in 1996. In addition to clothing endorsements, McGowan has appeared on numerous magazine covers including Seventeen, Interview, Maxim, GQ, Entertainment Weekly and Rolling Stone. She has also frequently been featured on Maxim, FHM and Stuff magazine's sexiest women lists.

While dating Marilyn Manson, McGowan appeared in a music video for the song "Coma White", and also performed backing vocals and sung into a vocoder during the "thought, not spoken" break during the song "Posthuman". Both of these songs are available on the album Mechanical Animals.

McGowan appeared on a BT track called "Superfabulous" from his album Emotional Technology, which was also featured on the final Charmed soundtrack, The Final Chapter. The song has been featured in several films, including Win a Date with Tad Hamilton and Raising Helen. She wrote and recorded a song titled "Protection," which was featured in her 2001 film Strange Hearts. McGowan has also appeared in the Imperial Teen music video for "Yoo Hoo", which was featured on the Jawbreaker soundtrack.

McGowan has expressed interest in recording an album of her own. During an interview with Living TV, she said, "I was actually thinking of going back and doing more soulful tunes and older tunes...and I would love to, when I have a little bit more time." In the Charmed episode "Sense and Sense Ability", McGowan performed, in character, a cover of the Peggy Lee classic "Fever". In 2007, it was announced that McGowan would be performing three songs from the Planet Terror portion of Grindhouse. These songs will be released on Terror's soundtrack by the Varese Sarabande label. The songs are entitled "You Belong to Me", "Useless Talent #32" and "Two Against the World." A clip of the Dean Martin classic "You Belong to Me" can be found on YouTube.

In 1996, McGowan was nominated for an Independent Spirit Award for her role in The Doom Generation. A few years later, at the 1999 MTV Movie Awards, she was nominated for "Best Villain" for her role in Jawbreaker. In 2005, McGowan won her very first award "Best Sister" at the Family TV Awards, for her role on Charmed. In 2006, Blender included her on their list of the sexiest women of TV and film. The most recent award won by McGowan was under the category "Femme Fetale" for the 2007 Spike TV Guys' Choice Awards, which aired June 13, 2007. The award was for the role of Cherry in Grindhouse.