For the song see The Last Day on Earth 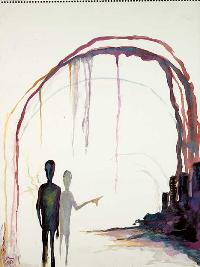 Last Day on Earth is a painting by Marilyn Manson. It depicts a man, accompanied by a spectral figure pointing to an Armageddon-struck civilization. It is now unavailable as it has been sold.

Manson's comments on this painting[edit]

"That one was meant to be romantic. It was painted at the same time as I wrote the lyrics to a song by the same name. It was about holding hands with someone you love and watching the world end. It's got a sixties science-fiction element. I think that one also left my grasp last week."