John William Lowery (born July 31, 1970), better known by his stage name John 5 (also typeset as John5), is a professional musician. He was the guitarist of industrial metal band Marilyn Manson before moving on to Rob Zombie in 2005. His stage name is formed by his first name and the fact that he was the fifth member to join Marilyn Manson. John 5 is also a reference to the bible section. It is also rumored that the name John 5 was originally coined due to the name of the robot in the 1986 movie Short Circuit. He is currently married to a woman named Rita. 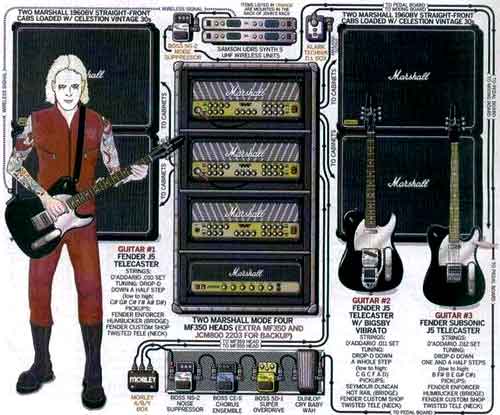 Note: John 5 uses batteries in all of his pedals

John has also been seen using the following pedals:

John Lowery was born in Grosse Pointe, Michigan. In 1983 at age 13, Lowery performed in a band called Dirty Trixx, where they performed Van Halen covers in a Michigan bar. He established himself as a more prominent guitarist when he performed with local band Raven Payne at age 16. Over the next 15 years, Lowery would play with increasingly popular musicians, such as k.d. lang, but his first big-break came when he followed in the footsteps of his guitar heroes: Eddie Van Halen, Steve Vai, and Jason Becker, as the lead guitarist for former-Van Halen frontman David Lee Roth. While rehearsing to tour with David Lee Roth in support of the Roth/Lowery-penned album, DLR Band, Marilyn Manson (who was impressed by Lowery's guitar-work on the DLR Band album), called John and asked him to join Marilyn Manson. John 5, as he came to be known during his time with Marilyn Manson, parted his ways with the band following the Grotesk Burlesk Tour. In recent years, John 5 has recorded with Rob Zombie, and recently revealed that he has a complete album with (as of 2012, current) Van Halen frontman David Lee Roth "in the can."

John 5's reasons for leaving Marilyn Manson were cited as being mutual, despite the mysterious nature of his sudden firing by Manson's manager in 2004.

John was quoted at the time as saying about the incident, "I don't know. . . I was nothing but nice to him," he continued. "I never screwed up onstage — well not really badly — and I did everything I could to get along with him. Maybe, just maybe, it had something to do with the fact that I don't drink or do drugs, and he's not like that at all. Maybe he held that against me. I don't know. He never said." John 5 was notorious among fans as being drug and alcohol free.

Before the incident, Manson had assaulted John on stage, notably, Manson kicked John in the face during a televised performance, leading to a brief confrontation in front of a packed and roaring audience. This was during the intro to "The Beautiful People", when played at the Rock Am Ring 2003.

Also, during the tour John maintains that Manson spoke about matters other than business only once, "It was on my birthday, and he turned to me and said, "Happy birthday, faggot" — then walked away."

Was John kicked out of Marilyn Manson?

No, he wasn't. John and Manson split amicable after five years of working together. Both came to a point in their career’s where they wanted to try new directions. John was working on his first solo album after being prompted by Les Paul himself. Manson was looking into new directions, including his paintings and filmmaking. So after the Grotesk Burlesk tour they came to an amicable agreement and went their own ways. The two still have contact and still hold a great deal of admiration for one another. And John is still a big a fan of the band and their music as he was before he joined.

What happened at Rock AM Ring 03?

Okay. One time and one time only. As seen on footage for the gig, Manson caught John with his boot during the opening bars to "The Beautiful People. Unnecessary gossip has speculated that this was deliberate. It wasn't. Here’s why John reacted. The Grotesk Burlesk tour had been pressurizing for all band members, and RAR was not one of the easiest concerts ever. During the opening bars of The Beautiful People, Manson, pranced towards John and accidentally caught John’s head with his boot...He reacted with frustration and as he has noted himself "unprofessionally". The reason was in the week before the RAR concert he had suffered some very close family losses. John lashed out. There is no bad blood between Manson and John over this incident and it can be written down to the pressures of touring (John had suffered from panic attacks during the Grotesk Burlesk tour, and Manson also had difficulties and pressures during the tour), and the personal happenings behind the scenes.

Despite this, John maintains he respects Manson, citing his skilled production style and his love for the band's music. John was already a fan of the band before joining in 1998. In response to a question regarding the reason for the split with Manson, John 5 was quoted by Vintage Guitar Magazine as saying, "(laughs) At the end of the last tour, I decided I really wanted to do this solo thing and that I had to devote all my time to it. The split with Manson was totally amicable. It wasn't one of those big breakups. We're friends. I wish there was some good dirt, but there's not (laughs)!"

In 2005 John 5 played guitar for Rob Zombie during Ozzfest 2005 and also recorded eight out of eleven tracks on the Educated Horses album which was released on Geffen Records in 2006. Due to conflicting commitments between John's band Loser and Rob Zombie, John moved over to playing for Zombie full time in early 2006. Although John 5 had hoped that Loser would be able to find a temporary guitarist during conflicting tour dates, record company Island Records, decided to drop Loser altogether from their record label.

"Being the founding member of Loser, my decision to leave was not an easy one," states John 5. "I've been juggling two careers both with Loser and Rob Zombie for over 1 year now. I found it impossible to be in two places at once."

In August 2008, Rob Zombie posted a blog on MySpace that John is currently working on the score for Zombie's fourth feature film, Tyrannosaurus Rex. This film has since been cancelled.

John 5 has recorded five solo albums and released one remix album (Remixploitation - 2009). His solo material is a mixture of hard rock, progressive bluegrass, and country music. His second solo album, Songs for Sanity, features guest appearances by Albert Lee and another former David Lee Roth guitar hero, Steve Vai. 5 is close friends with Steve Vai, who has been quoted as saying, "John 5 is an underrated guitar giant. It's rare to hear a musician fuse various styles and create a unique blend and brand all of his own. It takes balls, but that's what's needed to be truly original."

In 2006 John also worked with KISS frontman Paul Stanley on Stanley's second solo album, Live to Win, and with Meat Loaf and Nikki Sixx on Meat Loaf's Bat out of Hell III : The Monster Is Loose.

Following the success of Songs For Sanity (one of Shrapnel Records' top-selling albums) and 2004's Vertigo, John 5 announced he was working on a third solo album, this one entitled The Devil Knows My Name. The album was released on April 3, 2007 by 60 Cycle Hum Records and features collaborations with Joe Satriani, Jim Root of Slipknot and Stone Sour, and Eric Johnson. Also featured are fellow Rob Zombie bandmates Piggy D and Tommy Clufetos. Piggy D is also responsible for the album design.

In early 2008, John 5 released his first guitar instruction DVD: "The Devil Knows My Name". This is the first (Unofficially rated) rated "R" instructional dvd's. It features videos of John playing his songs, with topless women wearing masks in small flash clips during the performance. After the performance of the songs, he then teaches you the techniques that helped build that song. Everything from industrial metal to country banjo rolls.

On June 3rd, 2008, 5 released his 4th studio record, "Requiem", the songs are all named after torture devices.

On February 14 2009, John 5 released a remix album called Remixploitation. This album also contained one new track Eat It Up.

In August 2009, John 5 announced on his twitter page that he was working on his new album and had already made 6 tracks. In March 2010, the album title was released and is entitled The Art of Malice.

In 2012, John 5 revealed that he has an "entire album in the can" with David Lee Roth, the current Van Halen frontman who had employed John 5 in his solo band until he was first asked to join Marilyn Manson.

In 2004, Fender introduced the J5 Telecaster guitar. Designed in collaboration with 5 in Scottsdale, Arizona and built at Fender's own manufacturing facility in Ensenada, Mexico. The guitar comes in two models: the standard J5 Telecaster and the upscaled J5 Bigsby Telecaster. In an interview with Vintage Guitar Magazine, John had this to say about the origin of this guitar:

"I was endorsing Ibanez for a while, and playing in all those hard rock bands and you don't really play Telecasters with Halford or David Lee Roth or Manson. I was at a NAMM show, and Ibanez didn't have my picture up with all their other endorsers. I thought, "Hmmm, that's weird." Then I walked by the Fender booth and they had this huge picture of me playing a Telecaster, one of the couple times I played one with Halford, actually up on the wall! So we started talking and they knew my playing style was broader than the Manson stuff, and they said they wanted to give me my own signature line. I was like, absolutely. I was pretty much signing contracts with Fender a week later."

The guitar is based on a standard Telecaster with a high-output humbucker in the bridge position, a "twisted tele" pickup in the neck position, a custom headstock (for behind the nut bends), a black finish, and a chrome pickguard. Fender produces two models; one with a standard fixed bridge, and one with a bigsby vibrato. He used this guitar on the Grotesk Burlesk tour when he was in Marilyn Manson, and he currently uses it on tour with Rob Zombie.

In 2009, Squier released a cost efficient version of the John 5 guitar based upon his prototype Fender Telecaster. 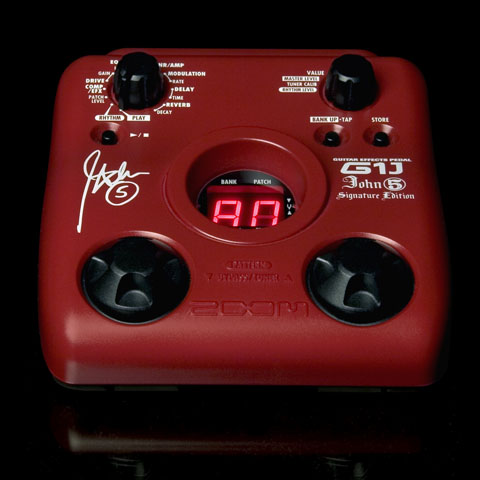