Nathan Jonas Jordison (born April 26, 1975; died July 26, 2021), known by his number #1 or Joey Jordison is an American musician, record producer and songwriter. He is the co-founder or the Grammy award winning metal band Slipknot. He is also the guitarist and backup vocalist for horror-punk supergroup Murderdolls. He has remixed "The Fight Song" by Marilyn Manson, and appeared in the "Tainted Love" music video. Manson later returned the favor by appearing in Murderdolls music video for "Dead in Hollywood". and Jordison also appeared in The Death Parade. He also performed guitar on a track for The Golden Age of Grotesque which he was revealed to be working on, but it hasn't been released.

While growing up in Des Moines, Iowa, Jordison quickly developed an interest in music, learning to play the guitar and drums. Jordison joined multiple bands throughout his high school years, which led to him be invited to join The Pale Ones, at age 20. Jordison immediately embraced the idea and quickly became involved in all aspects of the band, which evolved into Slipknot. Jordison's dedication to music led to performances and work with many other bands over his career, including Metallica, Korn, Ministry, Satyricon, System of a Down, Roadrunner United and 3 Inches of Blood.

Jordison was born at Mercy Hospital in Des Moines, Iowa on April 26, 1975. he grew up in a rural area outside of Waukee. He embraced music at an early age, which he attributes to the influence of his parents: "they always sat me down in front of the radio, rather than the TV." He played guitar until receiving his first drum kit as a gift from his parents at age eight, and started his first band while in elementary school. At a young age Jordison's parents divorced; he and his two younger sisters stayed with their mother. His mother remarried and set up a funeral parlor where Jordison would occasionally help. Jordison has stated he felt a sudden responsibility to be the man of the house, and this responsibility turned him into a more mature person at a young age. 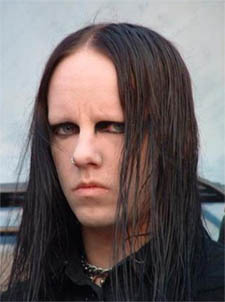 Jordison did not enjoy his time at school, admitting he "was really introverted and didn't have many friends." His grades suffered due to his focus on music. Despite being involved in multiple projects, he did not have his first serious band until he was fifteen. He formed Modifidious in which he played drums. He later described them as "total speed-metal thrash". The band helped Jordison break new ground, playing for live crowds in support of local bands including Atomic Opera, which featured Jim Root, and Heads on the Wall, which featured Shawn Crahan. After a multitude of line-up changes including the presence of Craig Jones and Josh Brainard—who would later appear in Slipknot—the band released two demos in 1993: Visceral and Mud Fuchia.

After leaving school, Jordison was hired by a local music store called Musicland. In March 1994, after a recommendation from a friend, he got a job at a Sinclair garage in Urbandale. Jordison worked the night shift, which he preferred, as it left his weekends free and allowed him to spend time with his friends and listen to music while working. In early 1995, Modifidious disbanded because of a shift in interest from thrash metal to death metal in America. Following this Jordison joined a local band called The Rejects as a guitarist, with whom he only played a couple of shows. Jordison was also involved in a band with Paul Gray, formed mostly as a joke, called Anal Blast. Gray also attempted to recruit him for another band, Body Pit, but he declined the invitation to remain in The Rejects.

In September 1995, Paul Gray approached Jordison while he was working, offering him a position in a new project called The Pale Ones. Intrigued and at a point where he was "lost", Jordison attended rehearsals at Anders Colsefini's basement and immediately wanted to be part of this new band. Speaking of this moment he said, "I remember trying so hard not to smile, so I didn't look like I wanted to join, I remained poker-faced, but I thought they ruled." A lot of Slipknot's early development was discussed by band members while Jordison worked night shifts at Sinclair's garage. He is considered one of the most dedicated members of the band and is involved in most elements of the band including writing, mixing and production, and is reportedly "the first to arrive and the last to leave."

Each member of Slipknot is assigned a number; Joey was assigned "#1". Although Jordison has always been closely involved in almost every aspect of the creation of Slipknot and Murderdoll's music, including the mixing and production stages, he has only fully produced one album with either band: Slipknot's 2005 live album 9.0: Live. In August, 2008, Jordison broke his ankle and Slipknot had to cancel some of its England tour dates. On August 22, 2009, Jordison was taken to the emergency room for a burst appendix, less than an hour before he was to take the stage for Seattle's KISW Pain in the Grass concert. As a result, Slipknot canceled following shows in August and September, to give Jordison time to recover.