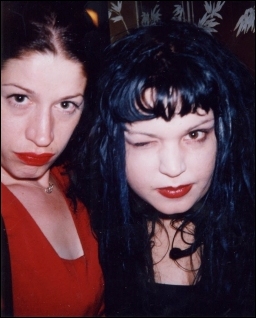 Jennifer Syme (left) with Jessicka of Jack Off Jill in 2000

Jennifer Maria Syme (December 7, 1972 – April 1, 2001) was a professional American assistant film director. She was the assistant of director David Lynch, of whom she had worked with for 10 years, and was famous for being the girlfriend of American film actor Keanu Reeves, whom she dated from 1999 until 2000. She died at the age of 28 in a car accident, allegedly caused by the consumption of alcohol and drugs which she had taken at a party at Marilyn Manson's residence the night before. She was a friend of Jack Off Jill vocalist Jessicka.

In his autobiography, Manson describes meeting and befriending Jennifer Syme, who he discovered was David Lynch's assistant.

"Our relationship with Lynch had begun two years earlier through a girl we had met named Jennifer, who claimed to be Lynch's assistant. At the time, everybody else had dismissed her as a name-dropping groupie. But when it came down to it, her claim was not only true, it resulted in an offer for us to collaborate with him on the soundtrack to his new movie, Lost Highway, as well as appear in the film."[1]

Jennifer Syme, 29, died on April 1, 2001, when she was thrown from her Jeep Cherokee after hitting at least three parked cars. Marilyn Manson defended himself against claims that he was responsible for the death of the woman after a party at his mansion that same night.

"After Jennifer was sent home safely with a designated driver, she later got behind the wheel of her own car for reasons known only to her," Manson said, reading a statement from his Posthuman Records management label.

A wrongful death lawsuit filed three days later by Syme's mother alleges Manson was negligent in "instructing the woman to operate a motor vehicle in her incapacitated condition." Maria St. John was also seeking unspecified damages and attorney's fees. According to the lawsuit, Manson gave Syme drugs before she was dropped off at her home. She got into her car, with the intent of returning to Manson's home, during which the accident occurred.