There’s no doubt you have already seen Marilyn Manson images taken by British photographer PEROU. He is the one who shot the Heaven Upside Down cover and his always epic photographs were used for Mechanical Animals, Holy Wood, Golden Age of Grotesque, EAT ME DRINK ME and Heaven Upside Down promotional campaigns. He even photographed Manson for the 2005 Vivienne Westwood collection and for many magazine covers including Time Out, KERRANG! and Metal Hammer. Last but not least, he was involved in the production of both God is in the TV and Guns God and Government tour films. We had the opportunity to talk to PEROU about his twenty-one years of collaboration with Marilyn Manson and how it resulted in the 21 Years in Hell book, coming out next month. 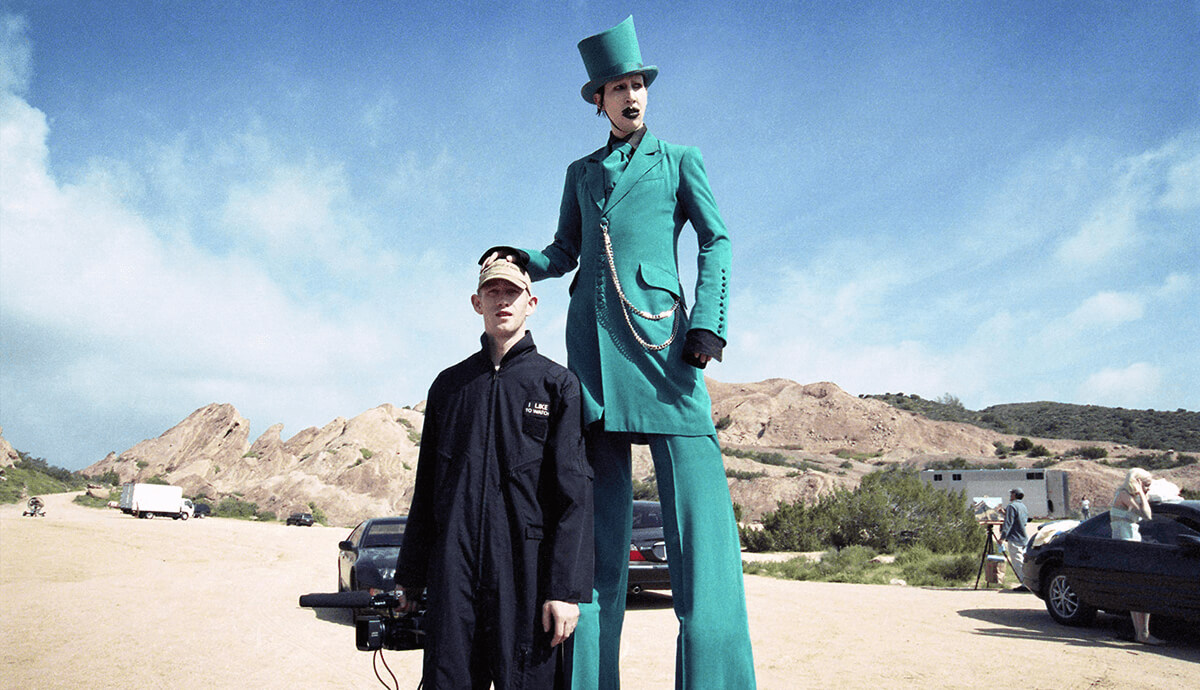 FOR THE UNINITIATED MARILYN MANSON FANS, COULD YOU TELL US WHO YOU ARE?

I am an English photographer. I mainly photograph people, although recently I’ve been photographing tigers, lions and other big cats in a studio. I set up inside a lion’s den.

WHAT MADE YOU WANT TO BECOME A PHOTOGRAPHER?

I was thinking about becoming a lorry driver or a Christian missionary in Africa, but had a crisis of faith and had a reality check that driving lorries in England wouldn’t be like driving big rigs across America in the 1970’s film Convoy. I became a photographer by accident, it was something I was a little bit good at and enjoyed. I still love making pictures, it’s my passion and obsession.

CAN YOU TELL US ABOUT THE FIRST TIME YOU PHOTOGRAPHED MANSON IN AMSTERDAM IN 1998, HOW DID IT GO?

Actually the first shoot was in Los Angeles in 1998. I was asked to photograph Manson by Time Out magazine for their Easter issue. The picture on the cover ran with the byline Jesus Christ?. I was already a fan of Manson’s music, I’d been listening to Smells like Children as loud as it would go, driving round London in my 1982 TransAm, with the roof off. 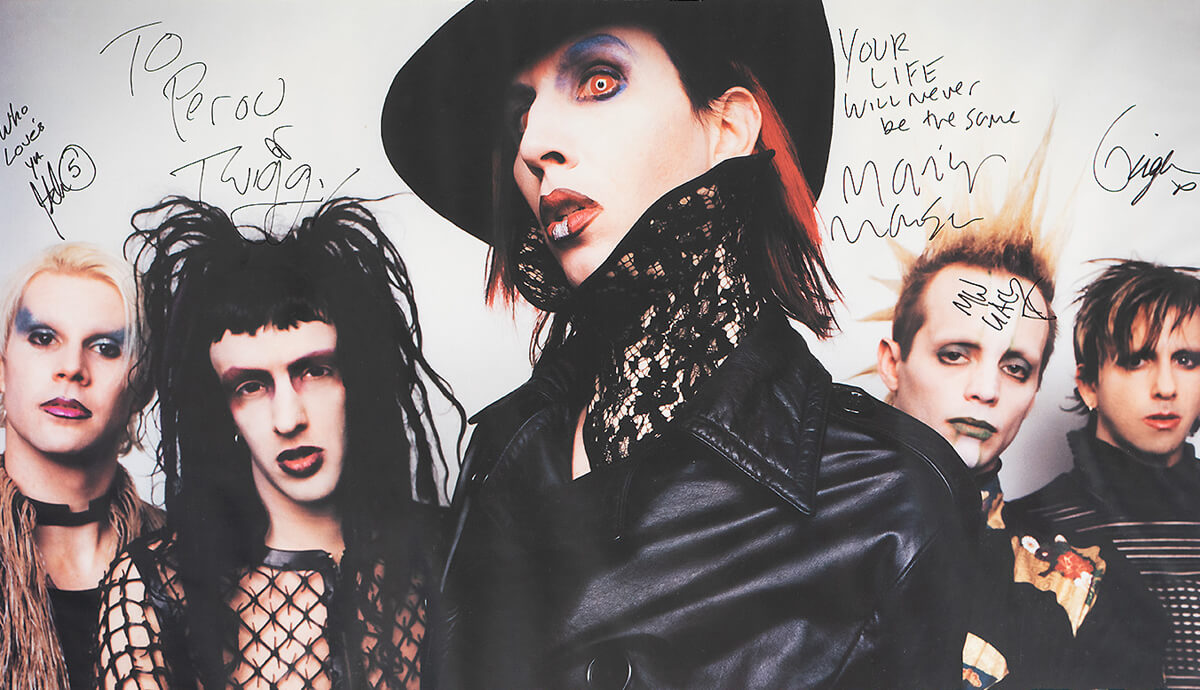 « This was my photo of the band when I first photographed them and it was made into a tour poster that they signed to me. Manson wrote "your life will never be the same" and that was correct ».

SINCE THEN, YOU HAVE PHOTOGRAPHED HIM MORE THAN ANYONE ELSE. WE COUNTED AROUND FIFTY DIFFERENT PHOTO SESSIONS, I GUESS YOU NOW HAVE SOME KIND OF RITUAL?

Wow, I never counted, myself. Not sure about a ritual? I never come to any shoot, whoever it is, with firmly, pre-conceived ideas. I think if you plan too much, it will always be different anyway or if you plan too much and stick to your plan, you waste opportunities for magik which you would never have been able to predict or imagine before. Magik happens in photography when you let it happen. Sometimes I badly sketch ideas or lighting scenarios but essentially all my shoots are freestyle, sometimes around a theme or an idea.

The first time I photographed Manson I was probably nervous because he was an American rock star and I was a young photographer from England without much experience. Over the years we have got to know each other quite well, so we know what we can expect of each other. Remarkably then, we are not stuck in a groove where we repeat the same thing over and over again.

As you’ll have seen, every time we shoot is different, you can probably tell I shot the picture but Manson is always evolving. Sometimes I don't like to photograph people more than once. I always enjoy photographing Manson. A lot of photographers have a creative vision for someone they’re photographing that they want to impose on them. I have always understood that Manson is an artist who doesn’t need too much input from me telling him what to do. Sometimes I tell him if something doesn’t look good to me: an outfit or a pose but often I am just trying to keep up with him and photograph what he presents to me without interfering too much myself.

Don’t want to step in the way of greatness, just catch it on camera. Jay-Z once told me, when I’d be telling him what I wanted him to do on the shoot, « It’s not about you, it’s about me », and that was brilliant advice for a photographer. Photographers need to understand the photo isn’t about them it’s about who they’re photographing, unless it’s a selfie. 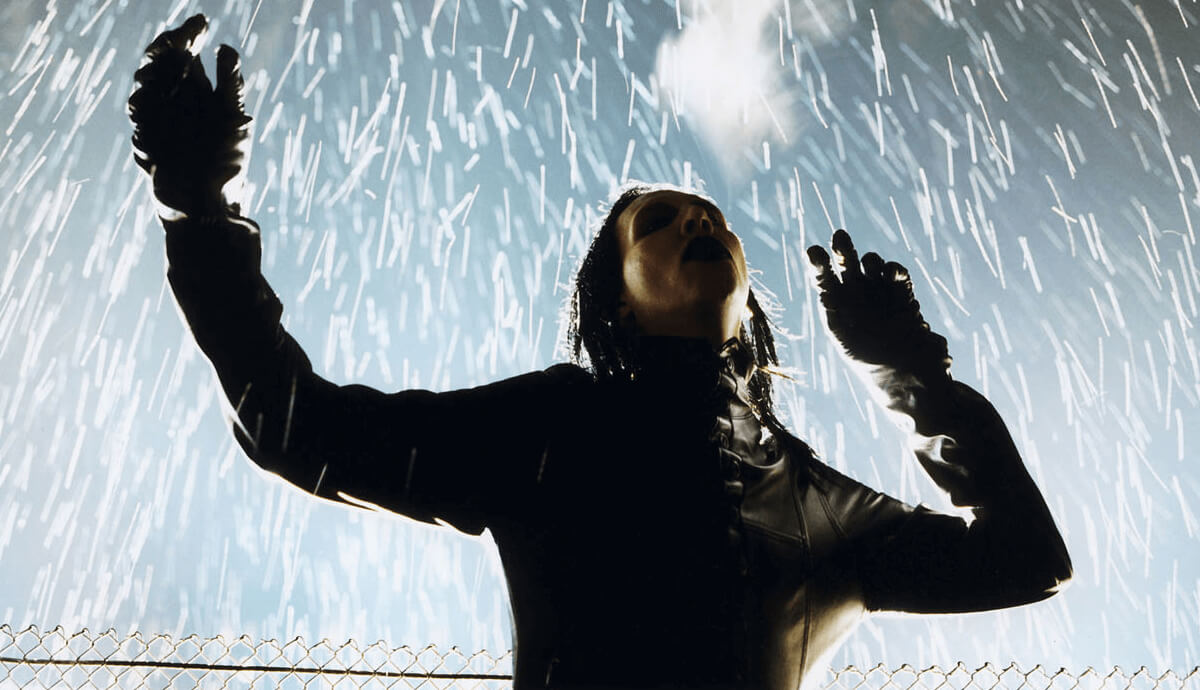 YOU WENT ON TOUR WITH MANSON SEVERAL TIMES, DO YOU HAVE ANY MEMORABLE MOMENT YOU WOULD LIKE TO SHARE?

Hmm, don’t like to talk too much about my misadventures. But I do discuss several moments in the book, like having to bribe my way out of Russia, or being on stage when the curtain drops and Manson starts singing and I’m so fucked that I’m just stand there unable to take pictures at all. Being on tour was difficult for me because unlike Manson, I didn’t have someone to do my washing or organize my equipment, I had to look after myself. I have had some great times on tour but after many days in a row, they were quite tough to get through, personally. These days I don't get wasted and subsequently I take a lot more pictures when I’m shooting shows. Better for everyone, all round.

YOU ALSO FILMED A FEW TOUR DOCUMENTARIES AND MUSIC VIDEOS FOR MANSON. IS IT SOMETHING THAT COULD HAPPEN AGAIN?

I might shoot some more video, Manson is often encouraging me to do so. But I pretty much hate directing as opposed to taking photos. Taking photos is a much more autonomous and is a more immediately gratifying activity, films involve too many people and too much pre and post production. I see the world in stills, still. I know moving image is probably the way forward, but I have to be dragged there. The rockumentary footage I’ve shot was all edited by my beloved friend Bill Yukich and he really directed the WE KNOW WHERE YOU FUCKING LIVE video entirely on his own but was kind enough to credit me with some input... But in all honesty, that was all Bill. He went on to direct and edit the next four or five videos after that too.

MANSON PAINTED A WATERCOLOR PORTRAIT OF YOU, AND ALSO PAINTED STRAIGHT ON YOUR FACE FOR YOUR 2015 COULROPHOBIA PROJECT AND BOOK. I THINK IT IS INTERESTING TO NOTE YOUR COLLABORATION WORKS BOTH WAYS.

That was cool that Manson got involved in the Coulrophobia book and I really appreciated that, but it’s no surprise that he can do makeup easily too, that fucker's good at everything. I was surprised when he painted me and I’ve been trying to get a copy ever since, I still don’t have one. 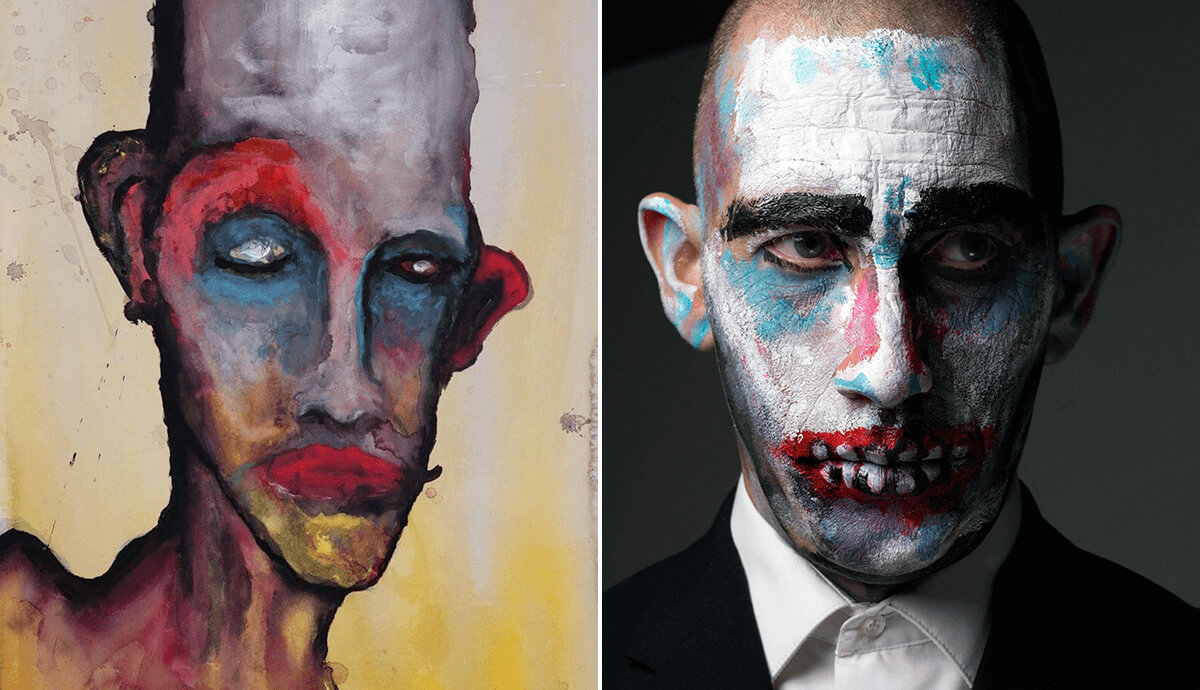 HOW DID YOU COME UP WITH THE IDEA OF PUBLISHING A BOOK TOGETHER?

What else am I gonna do with twenty one years of archive? It’s not like we started out planning to do a book from the beginning and it’s only recently that I realized just how much we’ve got and done together so we had to do a book. It’s very hard to put twenty years of photos into one book. But I think Paul from Peter and Paul, my favourite designer, has done an amazing job. I’ve worked with his agency for almost as long as I’ve been shooting Manson. And it doesn’t just have loads of pictures, it’s got a really long conversation about all the pictures running through it too, the words really add to the book. I can’t wait to share it with everyone.

HOW DID YOU CHOOSE WHICH PICTURES WOULD BE INCLUDED IN THE BOOK, WHAT WERE THE CRITERIA?

Pictures and words. So, as you will eventually see, the book is deliberately designed out of sync and confused in time. Which is how I (don’t) remember the order of events properly. Many of my memories of time spent with Marilyn Manson are confused and blurred. As best I can remember... I printed out everything as contact sheets first, flew to Los Angeles, specifically to go through them all with Manson, at his house, one long night. He was cool about the archive and pretty much said he was ok with any pictures going in. Then Paul and I edited that huge volume down as much as we could and put them in some kind of first, rough design sketch. I wanted to include as many never-been-seen-before pictures as possible and I wanted some images from every shoot. Nothing great has been left out, it’s all in there, but obviously we couldn’t put in every frame. There’s plenty left unseen. That weekend I shot Manson again so we had to add those pictures in too. I think it was at that point that I changed the design plan for the book and remember burning the first design in Bill’s garden fire pit.

Back in England, Paul started again with a new version of the book with our selection of pictures. During another long night at Manson’s house we recorded our seven hour conversation as we recounted stories of the pictures. Manson remembers more than me. But also we had different memories of the same events, like the day of Columbine, I was on tour with Manson when the news broke. And that weekend we did another shoot, so those pictures had to go in too. Returned to London with seven hours of difficult to understand, and hear, audio and new pictures. I tried to have a computer transcribe our conversation and it was making some really insightful but completely wrong translations of our words. Like « doomed shoot » became « gym shoe », « I pitch and you catch » became « I pissed in your case », « John 5 » became « junk files », « Knife » became « nice enemy ». As you can imagine that made things somewhat difficult. It took me a week to transcribe the text properly and then we had to edit that down to what was interesting and relevant.

I returned to Los Angeles once more, to photograph James Corden for an English magazine, and opportunely called in on Manson again to approve the edited text. Manson wanted for us to each re-read our parts. It was late and I was tired and I was trying to speed through hours of words. So I was doing my part « Perou says… » then also trying to speed through Manson’s, « Manson says… », but Manson wasn’t having any of it, « You’re doing my accent wrong » and insisted on reading his own part, slowly. What we’re left with is epic, I love it that it’s something tangible that can be held and cherished forever. Digital is so transient to me. This is something, something great.

IS THERE ANYONE THAT YOU HAVEN’T PHOTOGRAPHED YET THAT YOU WOULD LIKE TO?

I want to photograph everyone.