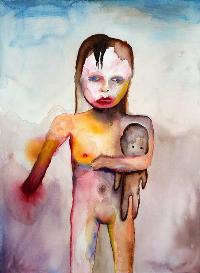 Hand of Glory is a painting by Marilyn Manson. It depicts a woman (or even a child possibly), holding a stuffed animal in one hand; the other hand being presumably severed. In an interview with MTV in 2002 Manson explains "The hand is a symbol of power and it represents stealing innocence and imagination from children. If you break down the whole show, that's what it's about. Me as a modern-day Peter Pan, not wanting to grow up. There's a difference being immature and being able to still think like a child."

The painting is now unavailable as it was purchased by actor Nicolas Cage. Manson has stated this as his favorite painting. Lithographs are available at marilynmanson.com.