Evan Rachel Wood (born September 7, 1987), is an American film, television and theater actress, and singer. Wood made her debut as a lead film actress in 2002's Little Secrets, and became well known after her Golden Globe-nominated role in Thirteen, which gained her critical praise. She has been described by The Guardian newspaper as being "wise beyond her years" and as "one of the best actresses of her generation". Her relationship with Marilyn Manson has received considerable news coverage.[1] In August 2010, after being engaged for eight months the couple decided to separate.

Wood was born in Raleigh, North Carolina to Ira David Wood III, an award-winning actor, singer, theatre director and playwright, and Sara Lynn Moore, an actress. Her brother, Ira David Wood IV, is also an actor. She also has a half brother, Dana, from her mother's first marriage. Her aunt, Carol Winstead Wood, is a Hollywood production designer. Wood is Jewish according to Jewish Law as her mother is a convert.

Wood and her brother were actively involved in their father's theatre, Theatre In The Park, while growing up; she appeared in a production of A Christmas Carol at the theatre when she was a few months old, and later starred as Helen Keller in a production of The Miracle Worker, under her father's direction. 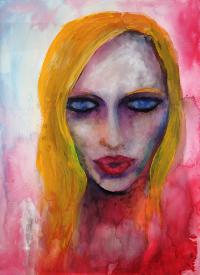 Someone Should Put Hearts Over Her Eyes, a portrait of Evan Rachel Wood painted by Manson

She appeared in several made-for-television films from 1994 and onwards, also playing an occasional role in the television series American Gothic. In early 1997, Wood's parents separated and later divorced, and Wood moved with her mother to her mother's native Los Angeles, where Wood was cast in the supporting role of Jessie Sammler on the television show Once and Again. Wood's first major screen role was in the low-budget 1998 film, Digging to China, which also starred Kevin Bacon and Mary Stuart Masterson. Wood remembers the role as initially being "hard", but notes that it eventually led to her decision that acting is something she "might never want to stop doing."

Wood left regular school at the age of eleven, and was home schooled, because of bullying and difficulty with teachers, who Wood says treated her like she was "spoiled" because she was an actress. She later drew upon her experiences with bullying to portray a malicious high school student in Pretty Persuasion. Wood subsequently appeared in a number of films catering to a teenage audience, including Little Secrets. She was set to have the leading role in the films Raise Your Voice and Mean Girls, but was unable to because of production scheduling changes. Wood's breakthrough movie role followed, with the controversial 2003 independent film Thirteen, for which she was nominated for a Golden Globe Award as Best Actress - Drama. During the time of Thirteen's release, Vanity Fair named Wood as one of the It Girls of Hollywood, and she appeared, along with the other actresses, on the magazine's July 2003 cover.

Her next two starring roles were in the dark independent films, Pretty Persuasion, in which she played a villainous, sexually active high-schooler, and Down in the Valley, in which her character engages in a sexual relationship with an older man posing as a cowboy. Wood has commented on her choice of sexually themed roles, saying that she is not aiming for the "shock factor" in her film choices, and adding that she hopes her roles "spread awareness" about the consequences of deviant behavior among teenagers, citing that she has known people who behave similarly to her film characters.

In 2005, Wood starred in the music videos for Bright Eyes' "At the Bottom of Everything" and Green Day's "Wake Me Up When September Ends". In September of 2006, she received Premiere magazine's "Spotlight Award for Emerging Talent".

Wood has roles in several as-yet unreleased films, including King of California, and Across the Universe, a musical directed by Julie Taymor and set in the United Kingdom, United States and Vietnam; she will perform musical numbers in the film. During August and September 2006, Wood filmed In Bloom, in which she plays a younger version of a character played by Uma Thurman.

In the summer of 2009 she will be playing the role of an over 500 year old French vampire in the second season of HBO's "True Blood".

Wood was homeschooled due to bullying, and received her high school diploma at age fifteen. She has a black belt in Tae Kwon Do and enjoys singing, having recorded the songs "Christmas Isn't Christmas Without You" and "Silver and Gold" for the School's out Christmas Album, which featured various artists. Wood is now considering taking part-time college courses, but is not yet pursuing a full-time college education.

Wood has said that her character in Across the Universe, whom she describes as an "old soul, street smart and ahead of her time", is close to her real-life personality. Wood also describes herself as being "laid back" and "not a party girl", citing her choice to stay away from what is considered a typical Hollywood lifestyle.

In 2006, Wood, who was described by The Guardian as an "Anglophile", dated her "Wake Me Up When September Ends" music video co-star, English actor Jamie Bell. She is also a friend of actor Joseph Gordon-Levitt.

In January 2007, reports emerged romantically linking Wood to shock rock star Marilyn Manson before he made public his estrangement from his wife, Dita Von Teese. Wood was allegedly a factor in the demise of their relationship according to Von Teese, who stated she was not supportive of Manson's lifestyle whereas Wood was. Two portraits of Wood, painted by Manson, were part of the inagural exhibition at The Celebritarian Corporation Gallery of Fine Art. Manson subsequently confirmed that the two were together in a BBC Radio 1 interview with presenter Zane Lowe. Wood inspired much of Manson's Eat Me, Drink Me album including the lead single "Heart-Shaped Glasses (When the Heart Guides the Hand)". Later in 2007 Wood appeared with Manson in the music video, "Heart-Shaped Glasses (When the Heart Guides the Hand)", having simulated sex with him in the video. Manson dedicated the album to Wood.

On November 5, 2008, it was reported that Manson and Wood had separated as of late October. According to the Bio Channel's authorised documentary on Manson, the course of the separation was Wood's refusal of Manson's engagement proposal. The two were separated through much of the recording but reunited after Manson's seventh album The High End of Low was finished. Before Manson set out to promote the album, they separated once more with Manson dating the pornographic actress Stoya.

In November 2009 Manson confirmed he had once more reunited with Wood and the two announced their engagement in January 2010. Seven months later, during the recording of Born Villain, it emerged that Manson and Wood had called off their engagement.

On February 1, 2021 Wood accused Marilyn Manson of abuse in her Instagram.

Wood has nine tattoos, two of which relate to Manson. On Feburary 14, 2007 she also had a black heart with a lightning bolt at the centre inked on her upper left thigh, in tribute to David Bowie. The lightning bolt referring to Bowie's Alladin Sane album, which portrays Bowie as Aladdin Sane, with the well-known and famous "bolt" make up design across his face. The bolt is sometimes mistaken as a Marilyn Manson related tattoo due to the similarity of it to the shock logo that was first used in Mansons sophomore album, Antichrist Superstar. The music video for Heart-Shaped Glasses (When the Heart Guides the Hand) also uses this similarity in symbols to allow it to seem like it was actually a Manson themed tattoo. This was the same session in which Manson had his spiral heart tattoo done. Her first actual Manson-related tattoo, dating from around January 2009, is of a 15 behind her left ear matching Manson's. After the two became engaged in 2010, Evan got another tattoo related to Manson, of a heart intertwined with an infinity symbol, behind her right ear.

Her other tattoos are a 'j' on her left ankle for former (and current) boyfriend Jamie Bell; the Edgar Allan Poe quote, "All that we see or seem, is but a dream within a dream" across her upper back; a candle based on a design by Shel Silverstein, on her lower back; the word "unless" underneath her left breast; and one on the inside of her lower lip, of a word she has yet to disclose. She formerly had a Beatles themed tattoo of a strawberry on her right ankle, but this tattoo was covered up with a black diamond, in reference to both Pink Floyd and her own nickname of "Crazy Diamond".