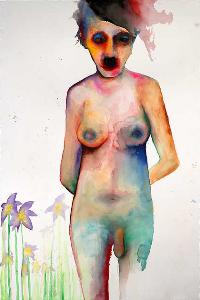 Die Deutsche Kampferin (The German (female) Fighter in English) is a painting by Marilyn Manson. It depicts a hermaphrodite with facial features reminiscent of Adolf Hitler and Charlie Chaplin. It is now unavailable as it has been sold for $105,000, a record at the time for Manson's artwork sales.

"The name comes from what I believe was a women's magazine during the Third Reich that was kind of like the Cosmopolitan of propaganda, and it was about being a strong woman for Germany. That painting was sarcastic. I started painting it right when I came home from the Magic Castle, because I'm a member there, and I wanted to do something that tied in '30s Hollywood and Berlin, and Charlie Chaplin was definitely an inspiration.

"I thought the flowers in the background were a cross between columbines, which some people don't know are flowers, and palm trees. It was also around the time of the Columbine event, which I was blamed for. It's so ironic now that the movie, Bowling for Columbine, has made people see how ridiculously the media treated the whole thing now. People don't realize how it almost completely destroyed my career. My life was at risk, and I basically wanted to give up. It's great that I've kind of come full circle."