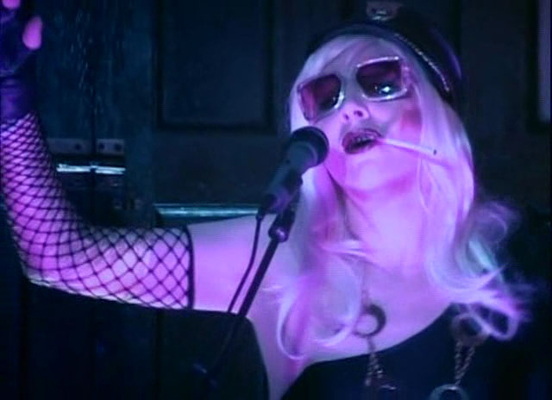 Christina Superstar is a character based on a real person portrayed by Marilyn Manson for the satirical film Party Monster. Manson attended shooting for the film during the third week of May 2002.[1]

Christina Superstar is a popular drag queen performer in the film's club circuit. For the first party Michael Alig organizes, he contracts Superstar to provide the music. When James St. James arrives, he finds the club nearly empty. Alig shrugs the issue, contesting that "Christina's here." During the confrontation, Superstar laughs as she observes Alig smash an overhead fire sprinkler, flooding the club. She then leaves the stage to dance beneath the rushing water.

As Alig's reputation and promotion skills increase, he begins to throw higher-scale parties. At one of these events, The King and Queen of Downtown, Superstar is named queen, opposite Keoki Franconi, who is named king. After kissing Franconi on the cheek, Alig releases a bucket of slime over Superstar. As the audience laughs at her, Superstar flails about, prompting club security to subdue her. Superstar begrudgingly returns for Alig's Disco Truck Party, where attendees party in the trailer of a cargo truck. Superstar is meant to drive the truck during the party, however St. James finds her drugged in the cab. In spite of this, Superstar still attempts to drive the vehicle, but police arrive and apprehend the partygoers. Superstar is later revealed to have died, although the cause is not made clear.

Marilyn Manson was interviewed on the set of Party Monster, along with several other actors in the film. Clips of Manson speaking about Superstar's costumes, the experience of Macaulay Culkin buying him a pack of cigarettes and his reason for accepting the role of Superstar were included as bonus material for the DVD release of Party Monster. On each topic, Manson had the following responses:

Manson's portrayal of Superstar is similar to his appearance in the music video for Nine Inch Nails' "Starfuckers, Inc.". The artist provided his own prosthetic breasts, butt and blonde wig for shooting. For his performance as Superstar, Manson sung an electropop song called "The La La Song" during his inaugural scene. This song is available on Party Monster: Original Motion Picture Soundtrack. Apart from babbles and screams, Manson's only true speaking line in the film is "How do you like my UFO?" Christina asks this to James St. James when he discovers her in the Disco Truck cab, as she reveals an LSD tab on her tongue.