Brian Tutunick (born March 31, 1968), better known by the pseudonym Olivia Newton Bundy, is a musician. He is the vocalist of Depravity Scale, and has previously been a member of Collapsing Lungs and Marilyn Manson & the Spooky Kids.

Brian Tutunick graduated from Coral Springs, Florida's J. P. Taravella High School in 1986. He went on to study cosmetology, graduating from that field sometime around 1989. When Marilyn Manson was attempting to form Marilyn Manson & the Spooky Kids, he was interested in recruiting bassist Jeordie White, better known as Twiggy, however because White was playing bass for Amboog-a-Lard, Manson did not attempt to persuade him. Instead, he approached Brian Tutunick, a friend from theater class, about playing bass for the band. According to Manson's autobiography, The Long Hard Road Out of Hell, Tutunick was the first member to be recruited for the group.[1] Tutunick assumed the pseudonym Olivia Newton Bundy, a portmanteau of singer/actress Olivia Newton-John and serial Killer Ted Bundy, because his first masturbation experience was over Newton-John.[2] 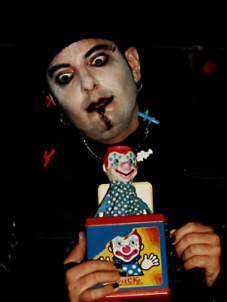 For Marilyn Manson & the Spooky Kids' first live performance, Tutunick obtained several mannequin heads from his school and had them placed across the stage where the band played at the Fort Lauderdale club Churchill's Hideaway.[2] In 1990, after the band had played their second show, Tutunick was fired and replaced by Gidget Gein. He went on to form Collapsing Lungs in 1991, where he again played bass. The band was signed to Atlantic Records in 1993 and a year later they issued their only major label release, an EP titled Colorblind. The band went on to headline the 1993 Slammie Awards opposite Marilyn Manson, who also won in several categories. Shortly after the release of Colorblind and partway through a national tour, Tutunick departed from Collapsing Lungs and Atlantic dropped the group from its roster, however the majority of the band resurfaced with slight lineup changes, under the name L.U.N.G.S., an acronym for "Losers Usually Never Get Signed".

In 1996 Tutunick, along with turntablist Grynch, formed a new band, Nation of Fear. The group recorded a song titled "Immortal" for a 9.49 WZTA compilation album, and later that year, they released their self-titled debut through DiMar Records. Nation of Fear went on to tour with Genitorturers and Lords of Acid, and like their tourmates, the band's live performances were known for such stage antics as S&M, power tools and pyrotechnics. After touring, the band returned to Fort Lauderdale where they recorded their second studio album, Everything Beautiful Rusts, which, upon its release in 1998, received much more attention than their debut. Nation of Fear disbanded in 2000, after which Tutunick could later be seen on the weekly music show Feedback, on PAX TV.

On December 24, 2004, a number of members of the Collapsing Lungs and L.U.N.G.S. incarnations of the band united for a reunion show at the Culture Room in Fort Lauderdale. Here, Tutunick reprized his position as vocalist, opposite L.U.N.G.S. frontman Crime.

Since early 2010, Tutunick has been the frontman in Orlando-based rock band Depravity Scale.