"Antichrist Superstar" is the twelfth track on the 1996 release Antichrist Superstar. A video (see below) and a promotional version of the single were made for the track, but the single was never commercially released. Like on the album's ninety-ninth track, "Antichrist Superstar" ends with the phrase "When you are suffering, know that I had betrayed you" sampled repeatedly. The original version of the song however ended with a different phrase, "You might as well kill yourself, you are already dead." This alternate sample can be heard on the live album The Last Tour on Earth. 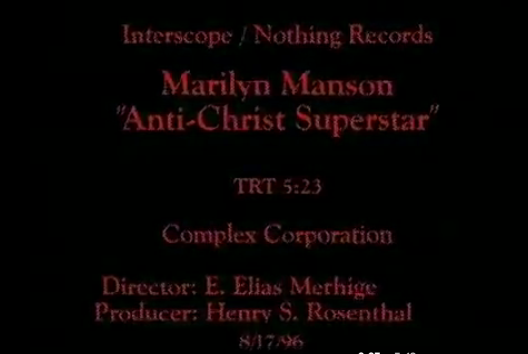 The music video for the song, entitled "Anti-Christ Superstar", directed by E. Elias Merhige and co-directed by Manson, was filmed sometime during 1996, but remain officially unreleased. It was originally screened at the 1997 San Francisco Film Festival as part of a program titled "Newly Minted Memories". It won a Golden Gate Certificate of Merit in the "Music Video" category.

In 1996, Merhige was contacted by Marilyn Manson to produce a music video for "Cryptorchid" the day after he saw Merhige's 1991 experimental horror film Begotten. Manson and Merhige met in Los Angeles, California where they would produced the video. Merhige then expressed interest in filming a video for "Antichrist Superstar", but wanted to use a bulk of footage outtake that he had already compiled. He shot excess material featuring Manson, then edited it together with the pre-existing scenes as divulged in the interview Dramatic New Scenes for Celebritarian Needs.

Merhige used military footage from different countries and different wars that depicted the fascist aspect of the song. However, Manson was not quite sure that it represented the criticism that the subject matter deserved. Ultimately, release of the video was vetoed by Interscope, who was appalled by the quality of the cinematography. The frontman, for his part, expressed interest in seeing its release someday, quipping: "that's not to say it won't be seen but I'm not sure if [Merhige] ever had a fair chance of finishing it because of the record company."

For over 14 years the film was shelved by Interscope.[1] Despite this, on June 19, 2010, the music video was leaked in its entirety on Youtube.[1] The leaked video is 5 minutes and 43 seconds in length although, according to the title card, its total run time is 5 minutes and 23 seconds.[1] It was filmed by Merhige in black and white, incorporating footage from Begotten as well as the military warfare footage.[1] Original scenes including Manson were also filmed where he is seen playing a demagogue in a business suit tearing pages out of a bible from the top of a podium similar to his live performance of the song.[1] Henry S. Rosenthal of San Francisco-based film company Complex Corporation mentioned his involvement in the production of the video and he is indeed credited in the film's intertitle.[1]

On July 21, 2011, the video was officially released on Marilyn Manson's website.