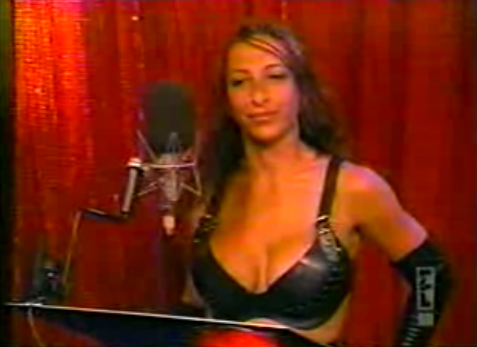 Adina Slotsky (born c. 1975) is an American artist and photographer, as well as a self-proclaimed dominatrix.[1] Her encounters with Marilyn Manson are documented in Manson's autobiography The Long Hard Road Out of Hell and the unauthorized documentary Demystifying the Devil. In The Long Hard Road Out of Hell, a transcript of an interview held on August 9, 1997 where Manson describes Slotsky comprises the "Meating the Fans / Meat and Greet" chapter, where she is referred to alternatively as "Alyssa".[2] When Slotsky was around 17 years old,[1] she met the band backstage at the Plus Five in Fort Lauderdale, Florida in 1993.[3][2] Manson explains, "I immediately realized that she was deaf because of the way her voice sounded. She told me that she could feel the music when she's close to the stage and that's how she gets her enjoyment from it."[2] Manson goes on to assert that Slotsky apparently wanted to have sex with him, but because his girlfriend, Melissa Romero, was also at the club, he was not interested in her advances.[2] In Demystifying the Devil however, Slotsky gives a different account of the meeting, explaining that after the club manager approached her about visiting the band backstage, "Brian comes up and he grabs my boob, I'm like, fuck you!"[3]

The exact date of Slotsky's second encounter with the band is unclear. Citing Manson's autobiography, the meeting can be traced to the summer of 1994, when the band spent some time in Miami, Florida recording a cover of Tubeway Army's "Down in the Park".[3] However citing Slotsky's 1999 appearance on Howard Stern and her 2000 appearance in Demystifying the Devil, the meeting can be traced to a time when she was around 17 years old[1] and Marilyn Manson was recording their major label debut, Portrait of an American Family,[2] which occurred in 1993. While both accounts state that the incident took place in South Beach, in reality no material on Portrait was recorded in this area of Miami, which would somewhat lean the date in Manson's favor if his account did not place her age at the time as 19.

When Manson left the band's outpost at South Beach Studios "to get something to eat," he ran into Slotsky, a resident of South Beach at the time,[3] who he invited back to the studio to meet the band, Trent Reznor and Sean Beavan, among others. Manson muses that "[...] it was ironic because just that day, Pogo was saying that one of his fantasies was to have sex with a deaf girl because then he could say whatever he wanted without upsetting her or feeling embarrassed."[2] Manson confesses that "to break the ice, I usually say whatever is on my mind," which in this case led him to ask Slotsky to take off her clothes; she complied, stripping down to her boots, leaving the group both shocked and amazed to command this much "sexual power".[2]

The band proceeded to cover Slotsky in a variety of uncooked meats they had collected earlier that day, which Manson describes as "one half hour of pure meat cavorting."[4] The group documented the experience with sketches, photographs, on videotape, and "whatever way we could capture this great moment in art history."[4] According to The Long Hard Road Out of Hell, Manson then tried escalating the situation by asking bassist Twiggy and Stephen Bier, better known as former Marilyn Manson keyboardist Madonna Wayne Gacy, to scotch tape their penises together to see if Slotsky could put them both in her mouth. In the midst of this and the "cameras, street musicians, and sketch artists" in the room, the group allegedly decided that Bier should live his fantasy of having sex with a deaf girl. Manson notes that he does not feel Slotsky was being exploited by this, as it was something she was very excited to be part of, and everyone in the group besides Nine Inch Nails were "having a good time" watching the experience, although one of the things Bier shouted while reportedly having sex with Slotsky "seemed to echo through the room as maybe one of the darkest things we had ever heard."[4]

Afterwards, Slotsky wanted to take a shower to wash off the "meat slime and assorted body fluids." In light of this, Manson reports asking if he and Twiggy could urinate on her, which she purportedly condoned, granted that they kept away from her eyes and boots. During this however, Twiggy did not aim properly and splashed her in the face. Manson explains "that was when everyone else in the room completely shut down and realized things had gone too far."[4] While Slotsky was left to shower, then-guitarist Daisy Berkowitz, returned to the studio. The group did not inform him what happened shortly before, but instead directed him to join Slotsky in the shower. Manson recalls, "The water hadn't really rinsed her off yet, and he started making out with her where urine had just been on her lips [...] If he knew that she was covered in urine, he probably wouldn't have cared anyway."[5]

During her interview segments in Demystifying the Devil, where she is accompanied by a gimp, Slotsky confirms meeting Manson in both Fort Lauderdale and Miami, however after explaining how the band covered her in meat, her story deviates from Manson's account. Instead, Slotsky explains that she was hesitant over Manson's proposition to have sex, but that regardless, he couldn't get an erection because of all the other people in the room[3] (it is unclear if she is referring to Marilyn Manson or Stephen Bier here, as she acknowledges the autobiography's statement "And he started to fuck her from behind" which refers to Bier, but thus far in the interview she doesn't mention by name anyone besides Manson). In Slotsky's account, Manson did not propose that he and Twiggy urinate on her. Rather, Twiggy used a toilet before aiming his urine at Slotsky. In retaliation, Slotsky reportedly urinated on a roll of toilet paper and threw it at someone holding a camera[3] (possibly Jonathan Rach, who Manson mentions in the autobiography was frequenting the studio as Nine Inch Nails' video documentarian at the time,[2] as Reznor was preparing the home video Closure). When Putesky joined her in the shower he did not advance on her, but rather he proceeded to complain about his bandmates.[3] At this point in the story, there are two things that do not deviate between both Manson and Slotsky's accounts: the extraordinary size of Putesky's penis, and the fact that the group threw a raw salmon head into the running shower after Putesky joined her.[6][3]