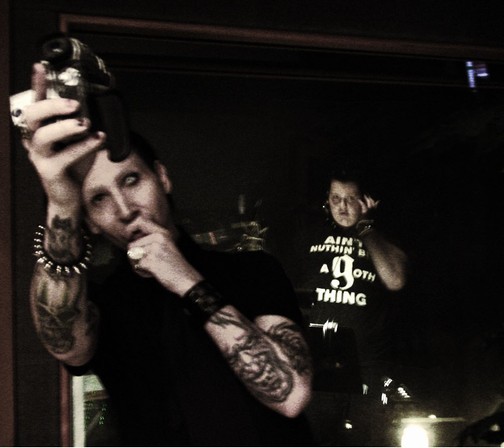 The performance on August 27, 2002 took place at a studio in Los Angeles, California, USA. Thanks to Make-A-Wish Foundation, 16-year-old Andrew Baines from Tennessee was able to fly to Los Angeles to spend the afternoon in the studio with Marilyn Manson.

Manson played Andrew six songs from the upcoming The Golden Age of Grotesque, but the full setlist is unknown.

Yesterday, I spent the afternoon with Andrew, who reminded that the things that I create are only made complete by those who enjoy them. I just want to simply say, "Thank You," to Andrew for sharing such an important wish with me.

I've included a video clip of a song from the album. I wanted to make Andrew a permanent part of history, sealed up in distortion and megabytes of plastic. Skold and I recorded him doing some back-up vocals, so when you hear The GAOG you will get a piece of our meeting. That piece is for every fan who couldn't be there.